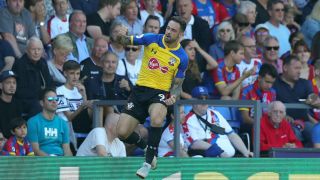 Southampton secured their first win of the season as second-half goals from Danny Ings and Pierre-Emile Hojbjerg saw off a Crystal Palace side desperately missing Wilfried Zaha.

The 25-year-old was a surprise omission from the Ivory Coast squad in midweek and was absent from Roy Hodgson's squad as the Eagles looked to get back to winning ways after two straight defeats.

It was Southampton, though, who claimed all three points with a 2-0 win to kick-start their season after picking up one point from their opening three games.

Ings looked sharp throughout and took advantage of hesitant defending from the hosts to latch onto Cedric Soares' right-wing cross and coolly slot between the legs of the onrushing Wayne Hennessey two minutes into the second half.

That goal woke Palace from their slumber and they came close to levelling soon after through Christian Benteke and James McArthur, who were denied by Alex McCarthy and the woodwork respectively.

Charlie Austin's woeful penalty just minutes after coming off the bench was comfortably kept out by Hennessey, but it mattered little as Mark Hughes' side held on for a big win.

Southampton looked brightest in the opening stages, but the first clear chance fell to Benteke, whose back-post header flashed past the post after McCarthy had failed to deal with a cross.

Hennessey then twice came to his side's rescue, first tipping over Hojbjerg's fizzing drive and then reacting quickly to paw away Luka Milivojevic's wayward defensive header.

Just moments after Ings had given the Saints a deserved lead, McArthur sent a superb curling effort against the crossbar from just outside the penalty area.

Aaron Wan-Bissaka's handball in the area after 65 minutes was not punished by Austin, whose tame spot-kick was repelled by Hennessey, while Mohamed Elyounoussi clipped the crossbar from close-range as the Saints failed to add further daylight between themselves and Palace.

The hosts were unable to capitalise and make some sustained late pressure tell, Benteke's point-blank header kept out by McCarthy, and they were caught on the counter as Hojbjerg made the points safe.

What it means: Hughes lifts the pressure

Even at this early stage of the season serious questions would have been asked of Hughes' position had Southampton gone four games without a win. As it is, the Welshman can now enjoy the international break in relevant comfort, while Hodgson is left to ponder how he turns around a run of three straight defeats following the opening-day win over Fulham.

Pat on the back: Ings silences doubters

There were doubts that Ings would rediscover his form after an injury-ravaged few years at Liverpool, but the popular striker has enjoyed a fine start to life with Southampton. He followed up his opening-day goal against Everton with a composed finish.

3 - Danny Ings has scored in three consecutive away league appearances for the first time in his career. Excursion. September 1, 2018

The Frenchman has rarely looked a serene presence during his time in English football and his full repertoire of uncertainty was on show again against the Saints. His lack of composure and poor distribution put his side under unnecessary pressure early on before his failure to cut out Soares' cross allowed Ings to score.

Palace travel to Huddersfield Town after the international break looking to breathe life into their stuttering season, while Southampton host south coast rivals Brighton and Hove Albion buoyed by a first win of the campaign.