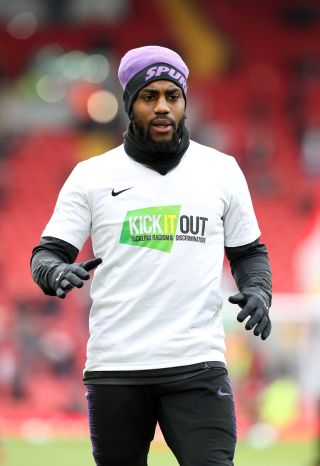 England defender Danny Rose has opened up about his experiences of racism in every day life, revealing he was stopped by police in Doncaster last week.

Rose, who has been subjected to racist abuse while playing for the Three Lions, said he cannot return to his hometown without a confrontation with the police while also suffering issues when travelling on public transport.

“It’s not just football. I got stopped by the police last week, which is a regular occurrence whenever I go back to Doncaster where I’m from,” he said on the Second Captains podcast.

In this exclusive w/ one of the most outspoken and arresting voices in football, we hear Danny’s thoughts on the Black Lives Matter movement & the incidents of racism he still faces in his daily life.— Second Captains (@SecondCaptains) August 3, 2020

“Each time it’s, ‘Is this car stolen? Where did you get this car from? What are you doing here? Can you prove that you bought this car?’

“You know, for me this has been happening since I was 18, since I was driving and each time it happens I just laugh, because I know what’s coming.

“It’s just how it is. Whenever I go on the train. One of the last times I got on the train, I got on with my bags and the attendant said, ‘Do you know this is first class?’. I say, ‘Yeah, so what?’.

“They ask to see my ticket and I show the lady it and this is no word of a lie, two people, white people, walk on the train after me and she says nothing.

“So people might think it happens but to me that’s racism. These are the things I have to put up with, being stopped all the time and being asked if I know this is first class and to show my ticket.

“This is everyday life for me but I feel embarrassed to even complain in a way, or bring it up, when you see the incident in America where a man, a black man, lost his life at the hands of people who were supposed to protect and serve.

“Whenever I do say things or complain, you do hear people say, ‘Well you’re on this money so just get on with it’. I just give up with hoping that things will change because that’s some people’s mentality towards racism.”

Rose, 30, admits he is at a loss at what he can do to stop it happening, insisting it has happened for the last 15 years of his life.

On his latest dealings with South Yorkshire Police he insisted there were no grounds for being stopped.

“Particularly when I go home to Doncaster, I don’t like to drive so I get the train, but whenever I do drive, I kid you not I will get stopped at some point while I’m in Doncaster, pulled over and questioned,” he said.

“My friends have been there with me a lot of the time when it’s happened. The last time, last week, when I’d just been at my mum’s house, I had pulled up in a car park so the engine was off.

“The police pulled in and they brought a riot van, three police cars and they questioned me. They said they’d had a report that a car had not been driving correctly.

“So I’m like, ‘Ok, so why does that make it my car?’ I got my ID out and they breathalysed me. It’s just honestly one of those things to me now. What can I do?

“I don’t understand what I can do or who I can complain to. This happened first when I was 15 and it’s still happening now I’m 30. So 15 years of this on and off the field happening and there’s no change whatsoever.”

Racism has been brought into focus by the Black Lives Matter movement, which led to Premier League players taking the knee before every game following the restart.

Whether it has a long-term impact or not, Rose is yet to be convinced.

“I have no idea. Before the incident with George Floyd in America, one day in a year we wear ‘Kick It Out’ racism t-shirts,” he said. One day a year.

“And then people look like they may be doing their part, but one day a year we wear a t-shirt saying ‘Kick It Out’ and that is it until the next season.

“That is not really…it is basically (tokenism) and doing that one day a year is not really going to get the message home.

“We just have to wait and see now what happens. It is just a crying shame that a man had to lose his life in the way he did for this movement having to happen.

“Obviously there’s never been such a devastating incident in what happened in America, George Floyd passing away.

“So for me that’s one of the biggest things I’ve ever seen in the world, let alone football. All I can say is that things have happened in the past, nowhere near to the extent of what happened in America and a month or two later it’s just business as normal.

“So I hope this is something that now will catch everybody’s eyes, ears and their mind. All we can do now is wait and see and hope that nothing like that happens again.