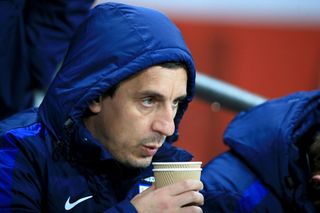 Gary Neville was sacked as Valencia manager on this day in 2016.

It was a short but eventful stay at the Mestalla for the former Manchester United and England defender.

Here, the PA news agency takes a looks back at Neville’s spell in Spain.

Neville, with no management experience, was surprisingly named as the replacement for Nuno Espirito Santo following his resignation in early December 2015. The former defender was on England’s coaching staff but – working with Sky Sports – had no desire to go into management and took the job as a favour to Peter Lim – a key investor in Salford City. Despite his reluctance, Neville said on his appointment: “If I’d turned down this job I’d have said goodbye to my credibility.” He inherited a side who were ninth in LaLiga and heading out of the Champions League at the group stage.

When Neville went in to the Mestalla, he had grand visions of not only leading Valencia up the table, but also leaving a lasting legacy in terms of putting a structure in place. They were, sadly, delusions of grandeur as Neville struggled to make an impact. He did not win a league game until the 10th attempt, a Copa del Rey run to the last four ended in spectacular fashion and they lost in the second round of the Europa League knockouts. Neville admitted to regularly getting outsmarted by opposition managers and the language barrier proved a real issue.

There was no lower moment than a humiliation at the Nou Camp. At that point all of Neville’s wins had come in the Copa del Rey, earning them a semi-final tie with Barcelona. The first leg was a chastening 90 minutes that has gone down as one of the darkest days in Valencia’s history. They were beaten 7-0, playing with 10 men for 45 minutes, as Luis Suarez scored four and Lionel Messi three. There were calls for Neville, who admitted he felt “helpless” watching the rout, to resign, with former Valencia goalkeeper Santiago Canizares the loudest voice. Neville stuck it out, though, and saw his side draw the return leg 1-1.

Despite his friendship with Lim, Neville knew what was coming long before it did. There was a match in February against Real Betis, which Valencia lost 1-0, where he tried several different untested formations throughout the game. The Mancunian said he knew after that that he was out of his depth and his time was up. He managed to hold on for several more weeks, until he eventually got the sack after going out of the Europa League and then losing to Celta Vigo in the league.

Back to the day job

After his chastening experience in Spain, Neville vowed never to go into management again and who can blame him? Although continuing his coaching on England manager Roy Hodgson’s backroom staff, he quickly returned to the comfort of the TV studio in his role as a Sky Sports pundit and has gone on to enhance his reputation as one of the sharpest, well spoken and popular analysts on the circuit.