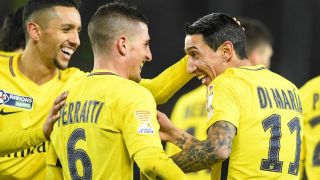 Angel Di Maria said he wants to play more at Paris Saint-Germain after guiding the French giants through to the quarter-finals of the Coupe de la Ligue 1.

Di Maria has struggled for regular game time under Unai Emery this season, with the PSG head coach preferring a front three of Neymar, Kylian Mbappe and Edinson Cavani.

However, the Argentina international winger – linked with a move away from the French capital – provided a reminder of his quality in PSG's 4-2 victory at Strasbourg on Wednesday – scoring his team's second goal.

"I'm happy in Paris, not so much with the season, I'd like to play more," Di Maria said.

"But I'm grateful for the minutes I'm currently getting and proving that I'm ready to be a starter.

"The truth is, if someone thinks about it and isn't happy, they need to play to prove that they should start."

Dani Alves and Julian Draxler were also on target following Yoann Salmier's first-half on goal as PSG avenged their 2-1 defeat to Strasbourg in Ligue 1 on December 2.

"We needed to improve on the league game," Emery said. "The team was more focused from the start. We did not allow the opponent the opportunity to lead.

"We could have been able to score more goals and play better after 4-2. But we are still happy. We will continue well, step by step, match after match."

Star PSG midfielder Marco Verratti added: "It wasn't an easy game. Strasbourg are in form. They'd won their previous two games against us and Bordeaux

"We started the game with intent. I thought we controlled it. Strasbourg didn't create many chances, but we're going through a phase in which every 2-3 chances we ship in a goal.

"We need to be even more careful about that, about the small details, because at the end of the day that's football, but we're satisfied of our qualification and our performance."