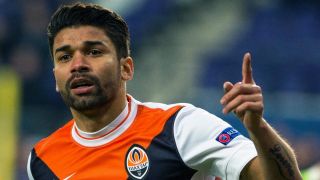 Shakhtar Donetsk forward Eduardo hailed his team's progression to the Europa League last eight as a "great achievement" after his goal sealed victory over Anderlecht on Thursday.

The former Arsenal striker followed up on his strike in the 3-1 home first-leg victory with the only goal in Belgium as Mircea Lucescu's men moved through 4-1 on aggregate.

Both teams had a player sent off in a dramatic closing period, with the visitors' Olexandr Kucher seeing red shortly before Kara Mbodji was dismissed for Anderlecht prior to Eduardo's last-minute strike.

Shakhtar last reached the quarter-finals of the competition in 2009 – the final year the tournament was known as the UEFA Cup – and went on to lift the trophy in a 2-1 extra-time win over Werder Bremen.

"I think we played well and produced a good result," said Eduardo.

"Making it to the last eight is a great achievement. At this stage, there are no favourites. All opponents are strong enough and it does not matter who we will face.

"Now we should not think about the semi-finals or the final of the tournament, we need to take it step by step and play in a serious, decent manner, with concentration on each team.

"Let's not forget that this is Europa League, where excellent teams participate in.

"The fact that I have managed to score is down to luck. As you could see, it happened in the last seconds of the match. We would have made it to the next stage without that goal anyway, but it was cool to net a goal in the end of the game."