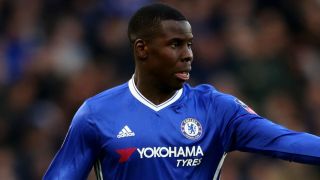 Kurt Zouma is confident his Chelsea career is not over despite being sent on another season-long loan to Everton.

The French defender, 23, signed for Chelsea in 2014 and had established himself as a regular in their team before suffering a serious knee injury in 2016.

He made just three Premier League starts in the following campaign and spent all of last season on loan with Stoke City before agreeing to join Everton for this term.

Zouma only signed a new six-year deal with his parent club in 2017 and is determined to force his way back into the Chelsea first team when he returns to Stamford Bridge.

"I will go back, yes," he told reporters.

"I have always believed in myself since I started playing football at 16. I have always wanted to show myself at Chelsea since I have been there.

"I know my injuries stopped me in the way I wanted to play but injuries are part of football and I want to show people I can come back and play there. That's why I need some game time at Everton here because they are a good team."

Zouma also revealed he was the one who had asked Chelsea boss Maurizio Sarri for another loan spell away because he expected to have limited opportunities.

"The manager arrived late and we didn't know what was the plan of the club," he added.

"At Chelsea there were a lot of defenders. I knew I needed to play regularly so I didn't want to stay on the bench and wait for my chance after two or three months, so that's why I wanted to go.

"I spoke with the manager and he agreed with me. I knew at Chelsea they had five central defenders already. He plays with four at the back, so there are only two who play. I didn't want to wait and he completely agreed."