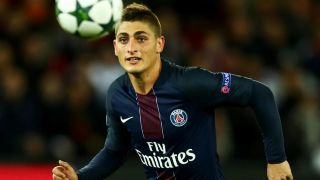 Marco Verratti reiterated his desire to remain with Paris Saint-Germain as the star midfielder dreams of Champions League glory in the French capital.

Verratti's future in Paris has continued to dominate headlines amid reported interest from Serie A duo Juventus and Inter, and other European giants.

The 24-year-old, who signed a five-year deal last August, has repeatedly denied speculation he wants to leave PSG and the Italy international did so again ahead of Wednesday's return leg against Barcelona in the Champions League last 16.

"I am part of a project and there are not many like this one in Europe.

"My dream is to win the Champions League here with PSG."

Verratti continued: "I must thank the coach because he always made me confident enough to play - that was the only way I was going to get back into the swing of things.

"Now I feel good and I can play three matches in a week without physical problems or fatigue. In modern football, the most important thing is to be physically fit."