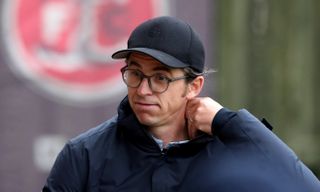 Fleetwood boss Joey Barton insists his side still believe they can overturn a three-goal deficit when they travel to Adams Park for the second leg of their League One play-off semi-final at Wycombe.

Lewis Coyle saw red for the Cod Army before David Wheeler and Alex Samuel struck either side of the break and a 4-1 defeat was compounded when Paddy Madden was given his marching orders late on as Fleetwood finished with nine men.

It is the Chairboys who are overwhelming favourites to book their Wembley spot on Monday and while a defiant Barton accepts the odds are against Fleetwood, the former midfielder is not ready to throw in the towel.

“We are still alive in this and whilst there’s a fight, you’ve got a chance,” he said. “I’m telling you now we will go there believing and give it everything we have got. If we come up short, we come up short.

“It’s a test of our character and we have got to climb up off the canvas, probably even underneath the canvas. We’ve got to get ourselves in a position to win the game, first and foremost, with enough time on the clock.

“Who knows what can happen?”

Wycombe are seeking promotion to the Championship for the first time in their 133-year history and will take a large stride towards that aim if they can defend their lead on home turf.

Manager Gareth Ainsworth refused to take anything for granted, though.

“It does feel like I’m talking at half-time in a game, pride before a fall and dreaming of things,” he told the club’s official website.

“Let’s get to back reality. We’ve got to make sure that we do a job in the same we did (on Friday) because that’s going to be a crucial game in the club’s hope to move out of this division.”