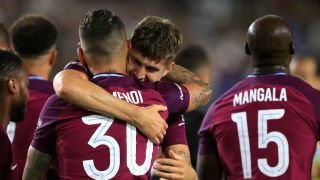 Manchester City's evolution under Pep Guardiola is most readily associated with free-flowing attacking football, but Aymeric Laporte's arrival for a club-record £57million from Athletic Bilbao continues a remarkable run of spending big at the other end of the pitch.

This trend goes back to Manuel Pellegrini's time in charge and was accelerated last year as Guardiola upgraded his full-back options.

The Premier League leaders now have six of the 13 most-expensive defenders of all time on their books – along with Ederson, who is the most-costly goalkeeper in history in terms of pound sterling.

Here, we look at their highs and lows and find Laporte should not necessarily expect things to run smoothly for him at the Etihad Stadium.

The France left-back turned in some blistering early performances and quickly earned cult-hero status with supporters thanks to his exploits on social media. A ruptured anterior cruciate ligament cruelly derailed his progress and judging whether Mendy was worth his hefty price tag can only truly begin once he makes a return from the setback.

A much-mocked transfer fee when Tottenham cashed in last year, England right-back Walker has proved precisely why Guardiola pursued him to add the pace and dynamism City badly lacked at full-back last season. The 27-year-old might have expected a battle for his place ahead of fellow new recruit Danilo but has established himself unquestionably as first choice, while perhaps adapting better than expected to his coach's intensive technical and tactical demands.

Job done, through to the next round! I told you going under the wall would work ! January 28, 2018

Like Laporte, Stones is 23 and probably offers the best indication of how his new team-mate and City's latest ball-playing centre-back might fare. High-profile errors stained his debut 2016-17 campaign in Manchester but Guardiola doubled down on his belief that the England centre-back could successfully build attacks from the back. Stones made the most of this support with a string of stunning displays until a hamstring injury struck in November. A run of goal-causing mistakes has been an unwelcome accompaniment to his recent return and show Laporte's progress is unlikely to be linear.

Delighted to have finalised my move to . Can't wait to get started and thank you for all the lovely messages August 9, 2016

For all Walker's solid performances and signs Bernardo Silva is at the beginnings of a rich vein of form, it is hard to look past Ederson as Guardiola's most important close-season signing. The Brazilian instantly injected a belief City's backline lacked when offering flimsy protection for the often-tragicomic Claudio Bravo. Guardiola's pursuit of a "sweeper keeper" was roundly dismissed as a flight of fancy but Ederson's coolness in possession and remarkable range of passing have given City an extra dimension in 2017-18.

A left-footed and physically imposing French centre-back like Laporte, Mangala's Manchester experience unquestionably stands as a cautionary tale for his countryman. Powerful, quick, strong in the air and decisive in the tackle, Mangala seemed to have it all on his City debut against Chelsea in September 2014. Unfortunately, a clattering own goal against Hull City in his next Premier League outing would be more telling of what was to come. Undermining the 26-year-old's natural capabilities is an accident-proneness allied with an inability to move on from a mistake - one clanger often means three or four. If Laporte's arrival coincides with Vincent Kompany finally enjoying an injury-free run, he has probably played his last game for City.

The enduring image of Otamendi's first season at City was one of him splayed on his backside as chaos unfolded around his latest failed slide tackle. Of all the improvements to have taken place under Guardiola, the Argentina centre-back's transformation is the most remarkable. He now defends from a predominantly upright position and has improved beyond all recognition with the ball at his feet. Stones and Laporte will jockey for position when the crunch games arrive in March, April and May; Otamendi is undoubtedly City's defensive leader and in possession of a deserved new contract.

Morning! So happy to continue in , thanks to the club and the technical team for their trust and respect, and to the fans for their wholeheartedly support in every match, at all times. -Nico-  January 17, 2018

Most expensive defenders of all time