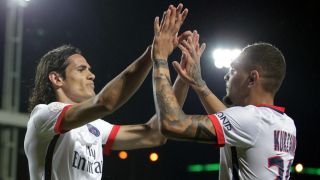 Paris Saint-Germain broke the Ligue 1 points record thanks to a 4-0 win over Gazelec Ajaccio on Saturday, while Lyon's stunning 6-1 victory against Monaco all but assured them of a place in the Champions League group stage.

Edinson Cavani scored a hat-trick as PSG dominated lowly Gazelec, with Zlatan Ibrahimovic adding gloss to the result in stoppage time - his 35th goal of the season.

The result lifted the champions to 92 points for the season, surpassing their previous marker of 89, set in 2013-14.

In Lyon, the hosts had already opened up a 2-0 lead by the time Monaco's Lacina Traore was sent off for a second bookable offence in the 23rd minute, and goals from Mapou Yanga-Mbiwa and a second from Alexandre Lacazette doubled the advantage.

Ricardo Carvalho reduced the deficit to 4-1 at the break, but Yanga-Mbiwa was on target again and Lacazette completed his hat-trick to wrap up an unlikely result in this second-versus-third clash.

Lyon's victory sends them three points clear of Monaco, who have a far inferior goal difference.

Nice leapfrogged Saint-Etienne into fourth with a 2-0 win at the Allianz Riviera.

The visitors had both Kevin Malcuit and Franck Tabanou sent off early in the second half, with Valere Germain striking twice in the last four minutes to strengthen Nice's grip on a Europa League berth.

Sixth-placed Lille aided Nice's cause by failing to overcome Guingamp in a goalless draw.

The bottom end of the table is poised nicely for next weekend's final round of fixtures, with Toulouse, Gazelec and Reims - separated by one point - all looking to avoid the two remaining relegation spots.

Toulouse triumphed 1-0 over the already-relegated Troyes to move into the box seat in the race for survival, ahead of Gazelec on goal difference.

Reims, meanwhile, were beaten 1-0 at Marseille to leave them 19th after a run of four consecutive defeats.

Elsewhere, Bastia beat Angers 1-0, Bordeaux cruised to a 3-0 win over Lorient, Montpellier triumphed 2-0 against Rennes, and Caen were 2-1 victors at Nantes.