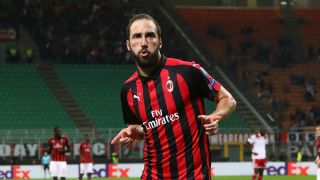 Gonzalo Higuain is a "true champion" who has elevated the play of everyone around him at AC Milan, former defender Paolo Maldini has said.

Argentina striker Higuain moved to Milan from Juventus on an initial season-long loan deal prior to this campaign beginning and having not netted in his first two games against Napoli and Roma, the 30-year-old has since scored six times in five games, including a brace against Chievo before the international break.

Milan fans will be hoping he extends his purple patch when they face Inter in the derby next weekend, and Maldini has lauded his impact, insisting he would rather have Higuain than their rivals' star striker Mauro Icardi.

Speaking at the Festival dello Sport event in Trento, Maldini, who recently returned to Milan as a director, said: "You ask me about Higuain and Icardi. Well, I say Higuain because he is a champion, a true champion.

"He raised the level of this team, not just with his performances, but also with his goals, with his way of training."

Gattuso on and : "They are two top-quality professionals who are an added value to this team. When you have the chance to work alongside these players you need to learn from them"October 6, 2018

Inter finished eight points ahead of Milan last season and are four clear already, although Gennaro Gattuso's side do have a game in hand.

Maldini admits that the Rossoneri still have some way to go if they are to bridge the gap on their cross-city rivals, who are competing in the Champions League this season.

Asked if he thought there was still a distance between the two clubs, Maldini added: "Maybe at the moment, yes, I do, but hopefully not at the end of the season."

Maldini spent his entire playing career with Milan and made 902 appearances across 24 years with the club.

He is hoping that 20-year-old striker Patrick Cutrone can also have a long and successful career with Milan having become a first-team regular last term.

"That's the hope, always - to create players from the youth sector that can then have a long career with the main team," he said.

"In today's football this is becoming harder and harder, that's for sure."