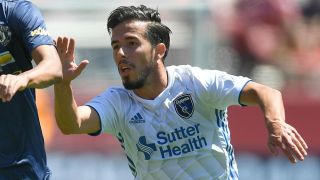 San Jose Earthquakes upset Western Conference leaders FC Dallas 3-1 on the road in MLS on Sunday, as Orlando City snatched a point in a dramatic 3-3 draw with New England.

Valeri Qazaishvili gave the visitors the lead in the 19th minute at Toyota Stadium, rounding goalkeeper Jesse Gonzalez to slide the ball into the far corner of an unguarded net.

Roland Lamah got on the end of Michael Barrios' pass to cap off a neat move with the equaliser just four minutes later.

But a delightful forward pass from Anibal Godoy teed up Jahmir Hyka to restore San Jose's lead two minutes into the second half.

A smart double save from Earthquakes goalkeeper Andrew Tarbell in the 53rd minute preserved his team's advantage.

And following a series of near misses from the hosts, Chris Wondolowski's brilliant run and pass was met by Qazaishvili at the back post to make it 3-1 and seal a surprise away victory for the Conference's last-placed side.

Sporting Kansas City took advantage, closing to within six points of the leaders by winning 1-0 away to Houston Dynamo, who finished the match with only eight players.

Diego Rubio scored the only goal in the 76th minute thanks to an assist from 16-year-old Gianluca Busio, Alejandro Fuenmayor having been sent off for Houston as early as the 14th minute.

Darwin Ceren and Alberth Elis joined him in seeing red late on, while Dynamo manager Wilmer Cabrera was also dismissed by the referee for dissent at half-time.

Elsewhere, Seattle Sounders equalised from the penalty spot in the 91st minute and then snatched a 2-1 victory away to Minnesota United thanks to Will Bruin's 97th-minute goal.

There was no shortage of drama in the Eastern Conference, Scott Sutter meeting a free-kick in the 93rd minute to secure a 3-3 draw at home to New England for Orlando City, who ended the thrilling contest with 10 men after Yoshimar Yotun received a late red.

In the other matches on Sunday, DC United earned a 1-1 draw away to Montreal Impact, while Real Salt Lake saw off Chicago Fire 2-1.

Finally, Portland Timbers cruised to a 3-0 win at home to Philadelphia Union.