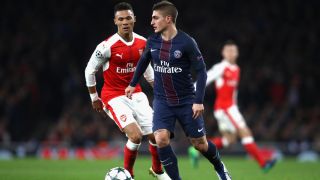 Paris Saint-Germain star Marco Verratti denied giving an interview in which he apparently told the Ligue 1 giants to sign champions to keep him.

Verratti is linked with a switch to Barcelona despite being contracted to PSG until 2021.

The Italy international was quoted as telling La Gazzetta dello Sport that he would be happy to stay if PSG signed "champions".

But later on Saturday, Verratti posted an image of the newspaper on Instagram, adding multiple question marks and the phrase 'SOS'.

After the journalist who conducted the interview, Alessandro Grandesso, confirmed its validity, Verratti denied it took place.

"I did not give an interview with anyone and I have never discussed with PSG the situation presented in the article this morning," the 24-year-old wrote.

"I hope you all stop speaking without knowing. There is a limit to all."

Barca are believed to be strongly interested in Verratti, who signed at PSG from Pescara in 2012.