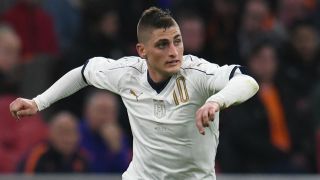 Marco Verratti expects to stay at Paris Saint-Germain next season despite an underwhelming season for the club and persistent links with a switch to Barcelona.

However, the Ligue 1 title was surrendered to Monaco and Champions League success eluded the Parisian club once again, following a record-breaking second-leg collapse against Barcelona in the last 16.

The 24-year-old's agent, Donato Di Campli, said earlier this month that talks would be held after the Coupe de France final, and Verratti was quick off the mark with his thoughts.

"It's the club that decides, but I think I'll be there [next season]," he said. "Afterwards we will talk with the club like every year.

"I still have four years of contract and I do not think to leave. I am very happy to be a part of this project and I have always said that winning with PSG is different from winning with all the other teams because I have been here for five years and I would really like to win something very important here at Paris."

The diminutive playmaker conceded it had been a tough season, but praised Emery for helping to develop his game and expressed his happiness at helping to give departing veteran Maxwell a fitting send-off.

"I think I have made progress," said Verratti. "We have a very demanding coach, who always wants a good game and attack. I think I also improved thanks to him.