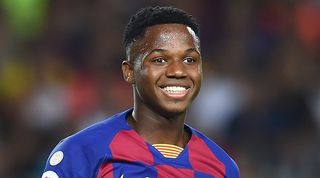 Barcelona will not sell reported Manchester United target Ansu Fati this summer, a source at the Catalan club has said.

The 17-year-old sensation is one of the most exciting prospects in European football and has been monitored by the Premier League giants.

But a Barca source told ESPN that the teenager is going nowhere, regardless of rumours of a €150 million (£134m) bid from Old Trafford.

"There has been interest in Ansu for a while from many clubs," the unnamed source said.

"Even Real Madrid were monitoring him before he renewed his contract.

"It's not news to us that clubs are asking about him, but Barca will not sell.

“Ansu is the future of the club and if he was sold, (club president Josep Maria) Bartomeu may even have to go into hiding!"

A separate source at the club assured the outlet that “however much money is being mentioned, you can ignore the speculation”.

Much of the speculation arises from the difficult financial situation the Camp Nou club finds itself in as a result of the COVID-19 pandemic.

Barcelona will only be able to sign players from cash they generate from sales this summer, while they must reduce their budget by €200m (£179m) by next season.

But Fati’s future at the club remains secure for now.

The Spain Under-21 international has made 16 La Liga appearances this season, scoring four goals.

He has a contract in Catalonia until June 2022, but the deal will automatically be extended until 2024 once he is permanently promoted to the first team.

Fati has already registered several records this season, becoming the youngest Barcelona player to feature in the league since the 1940s, their youngest league scorer ever, and the youngest-ever Champions League goalscorer.