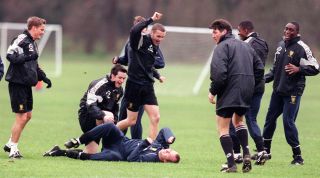 “Peter Taylor kept mouthing ‘I love you’,” recalled Kenny Sansom. “The next thing, he’s blowing kisses at me too.”

The chunky full-back, who admitted to being “naive” when he turned professional at Crystal Palace, later discovered room-mate Dave Swindlehurst had pushed the beds together in their room. Sansom soon cottoned onto the wind-up, but not before some curious moments ahead of his first-team debut.

His Botafogo coach later described him as “the most amateur professional ever to play football”, and Garrincha’s behaviour towards new signings did little to disprove that view. “He’d eat a really spicy meal,” explained former team-mate Didi, “then break wind in the new boy’s face.”

Ray Parlour enjoyed taking new Arsenal recruits under his wing and teaching them some helpful English phrases. After being schooled by Parlour, Brazilian midfielder Edu was reported to have greeted former Manchester United chief executive Martin Edwards with “you dirty bastard”.

The Romford Pele later admitted that he would “try to get foreign players to swear at important people all the time”. It was an old trick: ex-Manchester United man Andrei Kanchelskis told FFT recently of the time he was duped into calling Alex Ferguson "Scottish bastard". We're sure that went down swimmingly.

“You were told to shout ‘down with Amin’ in front of the first team,” explained an unnamed former Uganda striker in the early '80s. With the despotic Idi Amin rumoured to have political spies everywhere, this test of foolhardiness proved too much for some petrified newcomers, who opted not to play for The Cranes, rather than incur Amin’s wrath.

Having already threatening to “whack him around the head with my squash racquet” after signing for Nottingham Forest, Brian Clough then decided to bring down million pound signing Trevor Francis a further peg or two by instructing him to make his new team-mates’ half-time cuppas during his first week at the club.

“He put too much milk in mine,” moaned the barking mad Cloughie afterwards, “but luckily he played football better than he made tea.”

Portsmouth fans may be forgiven for forgetting about 2016 loanee Conor Wilkinson – he only played 20 minutes for them, after all – but the now-Gillingham striker remembers his short-lived stint at Fratton Park all too well. Earlier this year, Wilkinson bizarrely claimed that his loan spell at Pompey was cut short by manager Paul Cook because he refused to sing in front of his new team-mates en route to a match.

"I wouldn’t have minded had I been there for a few days or so, but after one day he wanted me to sing and I wasn’t very comfortable with it. I didn’t want to sing and he sent me back."

7. Gordon Hill served up a treat

“Gordon Hill had only been a professional for two months,” recalled Eamon Dunphy in Only A Game? - “but he made a mistake when he told us he was a great tennis player.”

On a pre-season Millwall tour to Bournemouth, Hill received calls from team-mates pretending to be tennis journalists. As his mates prepared for a night out, the future Manchester United winger was left slouched in the hotel lobby in his tennis whites, waiting for a TV crew which never arrived.

After arriving at Bayern Munich, Muller was disturbed to find that none of his team-mates wanted to speak to him. “It was like I was invisible,” admitted Der Bomber.

After grabbing a brace in the reserves a week into his Bayern career, Muller’s colleagues shook hands with him in stony silence. A fortnight later, they burst into applause when he walked into the dressing room and congratulated him for “enduring the two-week silent treatment”.

“The suit cost me a couple of grand,” admitted new Wimbledon striker John Hartson, after joining the Crazy Gang from West Ham in a club-record deal. Having torched the Welshman’s suit, Vinnie Jones et al proceeded to throw the charred remains in a puddle, torch the new recruit's tracksuit for good measure, then let down his tyres.

“I’d get a really hard toilet brush,” recalled Mel Sterland in his autobiography, “shove it in their bollocks, and twirl it around.”

Sheffield Wednesday was no place for faint-hearted apprentices in the early '80s, particularly with boss Jack Charlton actively encouraging “welcome to Hillsborough” ceremonies for new recruits. The rest of the initiation ceremony comprised dollops of Vaseline, boot polish and being tied naked on the freezing Kop.