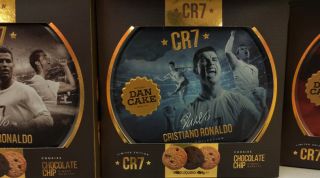 These are desperate times for the future of fruit in Norway. Beginning with former Portsmouth and Birmingham man Erik Huseklepp minding his own business at a pick n' mix stand, things soon take a turn for the worst when scruffy-suited duo John Arne Riise and Morten Gamst Pedersen turn up. Some autotuned singing, bizarre lines and horrifying moves later and we're left utterly bemused.

Footballers often parp on about giving something back to the fans, but Serie A heroes Francesco Toldo, Pippo Inzaghi, Vincenzo Montella and Pavel Nedved held true to those notions for promotion of Sky Italia's football coverage in the 2003/04 campaign. Take a look for yourselves, but if you don't feel all warm and fuzzy after watching it... well, you're just heartless. Just look at Nedved's lucious locks, for Christ's sake.

What would a young 'un do to get their heroe's autograph? Hang around the training ground? Stand in line at a signing session? Ambush him out of the stadium? Our protagonist tries all of these things to get his hands on Alan Shearer's scrawl before finally plumping for a shift in McDonald's. Honestly, the awful things we'll do for our favourites.

Good lord, what do we have here? Emmanuel Adebayor's days of striking fear into defenders may have long gone, but the Togo international still has the ability to frighten the rest of us with this grotesque advert for drink manufacturer Power Horse (nope, us neither but it sounds great), forever immortalised on the web. From the dramatic music with completely inappropriate dance to the seedy pout and head-cocked punchline, we'd be amazed if this one didn't send a chill down your spine. Genuinely scary.

Who wouldn't mouth off to a giant poster of Nicolas Anelka while holding the striker's repulsive endorsed burger? We've all done it. "It was always football, football, football, when I was a kid, but I’m glad that I’ve had a burger named after me," Le Sulk told FFT in July 2008. But we've seen the pictures – and trust us, you wouldn't want to go anywhere near the thing. We're not convinced Nic thinks it's as "champion" as he says...

Oh look, it's Kevin Keegan and former British, Commonwealth and European heavyweight champion Henry Cooper (he knocked down Muhammad Ali once, y'know) working out together. Isn't this nice? Kev does football things with a ball, while Coops punches it (of course!). But cheeky so-and-so Keegs has the audacity to steal his chum's punchline, and don't they have a jolly good chuckle about it? It's certainly not creepily homo-erotic in any way, though, that's for sure.

Eww. If drinking tomato juice yourself wasn't gut wrenching enough, then listening to Manchester United stars lap up the stuff surely comes close. But who says Michael Carrick hasn't got a personality? Just look at the England man go as he necks this grim creation with Robin van Persie, Ryan Giggs and Shinji Kagawa, all trying their darn hardest not to immediately return the contents of their stomach.

Footballers are self-centred big-timers who forget about their old pals? Not Fernando Torres, who sacrificed his dignity for a friend's dog training school in Spain. Just watch as the ex-Liverpool and Chelsea man makes a pug sit, guides a Doberman through fire (why?) and has kickabout with an Alsatian in a Gerrard shirt. 'Nacho' must be a good mate, indeed.

In fear of falling too far behind Cristiano Ronaldo in the commercial stakes, Lionel Messi took himself to Japan to star in two face wash ads for the inappropriately named Scalp-D. If this is all you have to do to earn millions, we'd like to know where to sign. Anybody?

Yes, it's King Kev again – but what's he helping to sell this time? Football boots? Energy drinks? Motivational speech CDs? Er, no. In 1996 the England manager-to-be had a hand in this snigger-worthy ad for Sugar Puffs, in which Toon super sub Honey Monster bags the winner, induces one of the worst lines we've ever heard from Jonathan Pearce and then just walks off. Before the final whistle and everything. (Seriously, what's all that about?) It's no wonder sales of the teeth-rotting cereal nosedived in Sunderland – and Wearside locals still haven't forgotten. "A bloke sat next to me had a bowl full this morning, I wanted to rip the spoon out of his hand," groaned one Mackem. "It's been 17 years."

No explanation needed here: Carlos Tevez, dancing for Cartoon Network in 2006. It's even worse than this.

It's hard to get past Wayne Rooney's acting in this 2011 ad for Casillero del Diablo wine, but we'll try. While Giggsy's keenness is admirable, the whole thing really falls down on the fact its concept is completely, utterly and outrageously ridiculous. Seriously, it makes absolutely no sense whatsoever. See for yourselves.

Times were tougher in the olden days. Long before those of agents and PR-savvy hotshots, footballers took what they could get from the ad men even if humiliation was the order of the day (it usually was). But surely not Pat Jennings; Northern Ireland legend and winner of five major trophies? Sigh. Still, it's not as if the internet is good for anything other than watching the former Tottenham and Arsenal shot-stopper dressed up as an oil filter saving shots, anyway. Oh Pat, the humanity.

Even the most respected top-flight stars can let their guard slip. But how Peter Schmeichel ever faced his Manchester United team-mates again after this is anyone's guess. The legendary keeper denied to FFT that David Beckham and Ryan Giggs filled his locker with Danepak bacon ("we didn't even have lockers at Old Trafford," he said) – but Big Pete can't have gotten away from this one scott free. Whether it's the butcher's outfit-keeper gloves combo (naturally) or his monotone ramblings in front of Danish football's answer to the Village People, Fergie's mob wouldn't have even known where to start.

Poor Gareth Southgate. Not only did he have to live with his spot-kick miss against Germany at Euro '96, the former England stopper gave himself something even more annoying to be remembered by with this advert for Pizza Hut later in the year. It's since achieved cult status, but that hasn't made it any easier for Gaz: "I wish I hadn't done it," he grumbled to FFT. Still, he did, and we can laugh about it instead.

A genuinely excellent advert featuring Barcelona man Luis Suarez. The controversial striker proves he can poke fun at his more... ahem, questionable traits with this barrel of laughs from Uruguayan firm Abitab.