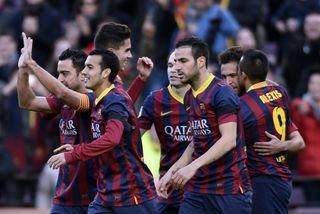 Only half of La Liga came back from holidays

Well, that was odd. All eight games on Sunday finished with at least one team failing to find the net. This is a hugely significant statistic, although LLL is not entirely sure why.

The results of the matches over the weekend proper – Real Madrid vs Celta and Rayo Vallecano vs Villarreal are to come on Monday – were 0-1, 0-0, 2-0, 3-0, 3-0, 4-0, 1-0 and 2-0. Perhaps that’s what comes of a lazy bones country that squeezes in three sets of holidays over the Christmas and New Year period.

A tiny, tiny straw for Betis to grasp

Life has been so blooming awful for Betis of late that the Seville side will take simply managing to not lose a game as a huge positive. The goalless draw at Valladolid – it looked a true life-affirming joy to watch in the freezing stands – was the team’s first point in three league games and warmed the cockles of Juan Carlos Garrido’s heart. “It helps get our self-esteem back,” declared the recently-arrived Betis boss, forced to take something from the game.

Almería showing the stomach for a fight

Back-to-back wins in La Liga against Betis and, more recently, Granada, without a goal being conceded show that Almería are more than capable of making a fist of their survival battle this season. “We are forming a very competitive team,” noted a pleased-as-punch Almería boss, Francisco Rodriguez.

Málaga had the right idea against Rojiblanco rivals

It was with a wrinkled nose and icy Paddington Bear stare that Bernd Schuster responded to press probing over whether his team was overly defensive against a visiting Atlético side, by fielding five at the back.

“If you think you can go head-to-head with them, then go for it. I’ll pay you,” was the retort from the German manager after a menacing pause. Not quite up there with King Zlatan's infamous “and bring your sister” retort once hurled at a journalist, but still pretty good.  The truth of the matter is that the cunning plan of the happy-go-lucky Schuster was a defensive concept which was not far off from paying off.

Everyone needs to stop being mean about Getafe

Poor Luis García. Every time the Getafe manager manages to get his players into a promising position in the league table, a lumpy, lousy defeat comes along. “I don’t know if we are afraid of facing teams above us in the table,” said an exasperated García after a 3-0 loss away at Sevilla on Sunday, “we are lacking this little step forward.”

Sevilla continue on their surge

Sevilla’s fairly comfy 3-0 victory over Getafe continued a sprightly run of form from the Andalusian side which has now produced five wins from the past six league matches, the odd one out being a draw.

Continuing to lead the charge for Sevilla was Carlos Bacca, who popped up with a goal and two assists in the win to have Marca declaring the striker as the new Luis Fabiano. Now if only they can find a new Fredi Kanouté. And Dani Alves. And Seydou Keita...and...

A positive start for Pizzi with Valencia

‘Thrusting’ and ‘surging’ are perhaps the best descriptions of Valencia’s 2-0 over neighbouring Levante, which saw a few changes to the starting line-up under the latest new boss. The rarely seen Pablo Piatti, Oriel Romeu and Dani Parejo began the clash against under-strength and out of form opponents, and all did pretty well. The worry is that three new footballers will now begin moaning about whither and dither to the press concerning about life in Mestalla, now that they are back in the spotlight.

“There were some individuals who were close to the level that we expect of them,” announced the Argentinean-born Spaniard whose honeymoon in charge of the team has about two or three days to run before a midweek cup clash against Atlético Madrid.

Antoine Griezmann makes run for player of the season

Of course, Cristiano Ronaldo, Leo Messi and the usual suspects will no doubt carry away all the silverware come the time for end-of-season awards, but Antoine Griezmann is giving the big hitters a fine run for their money.

The Real Sociedad winger continued a truly outstanding run of form with another strike in the derby victory against Athletic Bilbao to make it 12 league goals in the past 12 games, becoming the Frenchman with the most strikes in the first half of a campaign.

A fine goal set La Real on their way to a famous victory in Anoeta and closed the gap to fourth-placed Athletic to just the single point. “We won’t know what we want to achieve until there are not many games left in the season,” said Jagoba Arrasate on whether a return to Champions League football is being targeted.

Atlético’s defence is as important as Diego Costa

Hip, hip, hooray and tippy toes waggled in the air, like you just don’t care!

A dutiful Atlético Madrid played their part in beautifully setting up next weekend’s epic encounter against Barcelona at the Vicente Calderón, with both clubs now tied at the top on a whopping 49 points, one match short of the halfway point in La Liga.

Saturday’s 1-0 victory at Málaga was hardly a thrilling affair, but instead one for the tactical purists with the visitors’ performance being yet another example of patient, persistent play.

Whilst Koke’s second half effort secured the three points for Diego Simeone’s side, who spent Saturday night stretched out and purring at the top of the table, the real winners were the goalkeeper, back four and central midfield pairing, who showed military-style discipline throughout a testing tussle.

The clean sheet on the south coast was their eighth in the league this season and the key part of Atlético’s success. “The whole group won the game, it was a tough match,” agreed Simeone, who claimed that he wanted Barcelona to go top of the table, the following day. “It’s what we are used to,” explained the Argentinean managerial maestro, whose wish came true.

Of course, LLL is being a little facetious here in a repeat of an observation that the club could quite comfortably win the league title without Neymar and Leo Messi playing a single minute of football between now and the end of the season. Sunday’s 4-0 win over Elche was over in just seven minutes with Alexis Sánchez kicking off a hat-trick, continuing a prolific partnership alongside Pedro with the players netting 11 goals each so far this season.

“He’s a player who sets up goals and scores as well. He’s generous with teammates. Many times it is so painful for us to leave him out of the team,” said Tata Martino on Pedro.