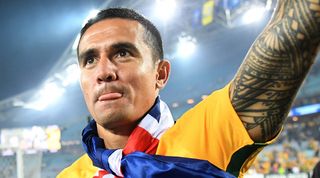 "The romance of the story is definitely not lost on me," said Tim Cahill. Not his personal review of The Notebook, but the 38-year-old's assessment of his return to play for Millwall. The Australian midfielder, scorer of 50 goals for his country, spent seven formative seasons at The Den and even helped Millwall to an FA Cup final in 2004, before a transfer to Everton in that summer.

Cahill's return to south London over 13 years later is one of the less likely returning hero stories. Yet he can look to these footballers for inspiration. Whether it’s debut goals, trophies or player of the season nominations, these 10 stars had reason to celebrate their second chances with former clubs that they had a strong attachment to.

Years between departure and return: 9

One man may not be able to change a club’s fortunes, but Kuyt came pretty close on his return to Feyenoord. As far as his scoring record is concerned, his best years came in a spell from 2003-06, when he notched an impressive 81 goals in 124 appearances – a return which helped bring about a move to Liverpool.

He may not have been the most glamorous of centre-forwards, but Kuyt eventually won the Anfield faithful over with his phenomenal work-rate and never-say-die attitude. The Dutchman helped the Reds to a League Cup and Champions League final, scoring in the 2-1 defeat by Milan in 2007.

On his homecoming to Feyenoord in 2015/16, Kuyt netted 23 goals in 38 games. However, it was his second season was the real star turn, culminating with a Kuyt a hat-trick on the final weekend to bring the title back to De Kuip after an 18-year absence. He promptly hung up his boots a few days later, the football equivalent of the ultimate mic drop.

Years between departure and return: 14

Matthews spent 15 years at Stoke the first time around, before joining Blackpool when the league returned after the Second World War in 1946. Having made more than 200 appearances in his first spell with the Potters, Matthews went on to play in more than 300 games for the Tangerines.

At the ripe old age of 46, most footballers would have packed it all in - particularly if they'd also gone through a war. Yet Matthews opted to re-sign for Stoke in 1962 and immediately set about silencing those who questioned whether he was past it. The winger won the FWA Footballer of the Year award in his first season back in the Potteries, and was soon knighted for his services to football. He went on playing until the age of 50, becoming the oldest player to ever appear in England's top tier.

Years between departure and return: 5

It may only have been a brief loan move, and his return would have been even more special had it been at Highbury, but there was still a romanticism to the two-time PFA Player of the Year winner scoring the decisive goal for Arsenal in his first game back against Leeds.

Collecting possession 10 minutes after coming on as a substitute in the FA Cup tie, Henry looked like he hadn’t aged a bit, calmly slotting the ball into the far corner of the goal in trademark fashion before running off to celebrate with Arsene Wenger and the home fans. The Frenchman only made six more appearances for the Gunners before returning to New York Red Bulls to end his career in the U.S., but his exploits in north London will never be forgotten.

Years between departure and return: 13

This originally looked a signing motivated by sentimentality - and publicity - then a smart football decision. In the summer of 2017, Everton appeared a club on the rise, just as Wayne was on the wane. It hasn't quite worked out like that. While the club have struggled, Rooney has been a rare bright spark. He's scored 10 goals in 17 league games, including a magnificent hat-trick against West Ham capped by a goal from inside his own half.

That means Rooney has more goals already in 2017/18 than in either of his two full seasons as a teenage tyro at Goodison, before he departed for Manchester United in 2004. There may be debate as to his best position and whether he and Gylfi Sigurdsson can play alongside one another, but Rooney's glee as he scores each goal for his boyhood club is clear.

Years between departure and return: 10

Shevchenko made an ever bigger name for himself once he moved to Milan, but he'd been scoring at will for Dynamo Kiev between 1994 and 1999, netting 60 goals in league 117 appearances. Over a decade later, following two spells at Milan either side of an unsuccessful one at Chelsea, the striker returned to his native Ukraine.

Shevchenko promptly proved there was more to the move than mere sentiment, netting a penalty on his second debut, then scoring a one-in-two 16 goals in 32 games in the following season. He retired in 2012 to become a politician, although his party claimed just 1.58% of the votes in that year's parliamentary election. The centre-forward always was better at putting the ball in the net than a cross in the box.

Years between departure and return: 11

The former West Ham, Manchester United and Manchester City forward is well known for his erratic off-field behaviour, but thankfully for his various employers he's usually just as lively in front of goal. Tevez, who first played for the club between 2001 and 2004, returned to Boca Juniors 11 years after his departure, scoring nine times in 15 matches as the Buenos Aires-based giants scooped the Argentine Primera Division title and the Copa Argentina.

He was on the move again in December 2016, joining Chinese Shanghai Shenhua to become the world's most highly paid player. However after just four goals and having earned a reported £29m in Shanghai, he was on the move back to Boca at the start of 2018. Tevez described his seven-month stint in China as "a holiday".

Years between departure and return: 7

These days, Keown makes his living as a TV pundit who delivers his analysis with a raised eyebrow and a permanent expression of concern. He made his debut for Arsenal in November 1985, helping his side to a clean sheet in a 0-0 draw with West Brom. The defender only played 22 league games for the Gunners before being sold to Aston Villa, after which followed a spell at Everton.

Yet Keown was recaptured by Arsenal in 1993 and went on to enjoy the best years of his career at Highbury, winning three league titles, three FA Cups and one European Cup Winners' Cup. He was also part of Arsene Wenger's Invincibles squad in 2003/04. Not a bad way to sign off.

Years between departure and return: 7

Ajax legend Cruyff burst onto the scene at the age of 17 and casually collected six Eredivisie titles, five KNVB Cups and three consecutive European Cups during his first spell in Amsterdam. Barcelona came calling in 1973 and Cruyff won La Liga in his first season. After leaving the Camp Nou (and following a short-lived retirement), he spent time in the USA with Los Angeles Aztecs and Washington Diplomats, before returning to Spain for a brief stint with Levante.

His heralded return to Ajax in 1981 was successful, as Cruyff added two more Eredivisie winner's medals to his collection. Ending his career at his boyhood club seemed an inevitability, but the Dutchman was inexplicably allowed to leave, then join arch-rivals Feyenoord for his final season as a professional in 1983/84. Feyenoord went on to win a league and cup double, naturally.

Years between departure and return: 10

The acclaimed Argentine playmaker had disappointing spells for Manchester United and Chelsea during a six-year stay in the Premier League, between 2001 and 2007. Yet his career began at Estudiantes back in 1994, before he left the club for a season at Boca Juniors, then made his name in Serie A. Veron would have to wait more than 10 years before returning to Estudiantes, initially on loan from Chelsea (because who hasn’t been loaned out by Chelsea?) before making the move permanent in 2007.

Veron loved them so much that, after leaving again in 2012 - this time for Brandsen - he changed his mind and re-joined a year later. It proved to be a wise decision: the midfielder won the Apertura tournament in 2006 and 2010, as well as the 2009 Copa Libertadores. At the grand old age of 42, Veron made another comeback in 2017, playing five times for Estudiantes in the Libertadores.

Years between departure and return: 8

A rising star of Spanish football, Reyes left Sevilla for Arsenal in 2004, making a bright start to his career in north London before his form faltered. Despite being in the considerable shadow of Thierry Henry, the winger still netted 23 times in 110 games for the Gunners, while winning a Premier League and FA Cup.

He would later return to the Ramon Sanchez Pizjuan after spells with Real Madrid, Atletico Madrid and Benfica, and went on to play a part in Sevilla's hat-trick of Europa League triumphs from 2014 to 2016. On his quest to play for every side in Spain, Reyes is currently on the books at Espanyol, having helped them to an eighth-place finish in La Liga in 2016/17.

One that got away: Robbie Fowler (Liverpool)

Years between departure and return: 5

It looked like it was written in the stars for Robbie Fowler, who returned to Liverpool in 2006 after five years away. His emphatic bicycle kick against Birmingham in 2006 had Anfield going crazy and would have won the Reds the game - had he been onside. Couldn’t the officials have just let it slide for the sake of a great story?

Either way, Fowler was only able to score 12 goals in 39 appearances before leaving for Cardiff in 2007. However, that at least took his over total of Liverpool goals up to 183 across the two spells and God – as Kopites refer to him – will remain a legend at Liverpool forever.