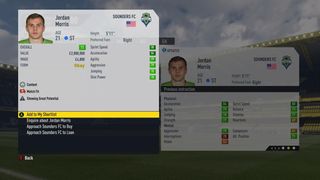 With a vast pool of players to scout in FIFA 17’s Career Mode, finding the diamonds can be tough. Just one undervalued gem can be the difference between failure and success, though, and there are plenty of them out there if you look hard enough.

The 11 players below are all available for under £3m, which makes them excellent value for money. While it's possible to get a great deal on those reaching the end of their careers, we’ve decided to focus on younger players with high potential and, therefore, greater long-term appeal.

Keep in mind that FIFA 17’s database updates regularly, and the following data is accurate at the time of writing.

Need to know: The 19-year-old Dragowski, who has played for Poland's U21s, signed a five-year deal with Fiorentina in 2016. While he’s rated at a respectable 71 in Career Mode, his potential can reach 85+ with the right development, which suggests he could become one of the best goalkeepers in the world.

Need to know: Newcastle and United States star Yedlin is a fine right-back, boasting an overall rating of 72 and incredible pace attributest. Valued at £2.4m, he’s not only a great buy for his current ability but for his high potential too.

Need to know: Henry was a fan favourite at League One Walsall before he moved to Brentford in the Championship. He’s back in action after an injury-riddled start, though, and while his overall rating (66) is the joint-lowest on our list, his speed and huge potential make him a terrific bargain at under £1m.

Need to know:Porto's Awaziem is another young star in the making, having been called up by Nigeria's senior national team in 2016. The promising centre-back has a range of brilliant defensive attributes and, in time, his overall rating could rise to 80 or above.

Need to know: Oxford is a potential star of the future for England, but don’t go expecting miracles out of him just yet. His initially overall rating is a mere 66, although that will quickly rise with a bit of expert coaching. Currently on loan at Reading, the West Ham youngster is valued at just £900k in FIFA 17.

Need to know: Tenacious Argentine Ascacibar has already been hailed as “the next Javier Mascherano” and competed at the 2016 Olympics for his national side. His potential is outstanding, while his stats - including a 92 rating for jumping and stamina - are already impressive.

Need to know: The next young international star in our list plays for Red Bull Salzburg in the Austrian Bundesliga. He’s a pacy winger with 85 sprint speed and 84 acceleration; as you might expect, he’s packed with potential. With 4* skill moves and an excellent dribbling rating, Lazaro is a consistently formidable opponent for any full-back.

Need to know: Norwegian star Midtsjø plies his trade for Rosenberg, for whom he made his debut as a 16-year-old in 2010. The midfielder possesses an array of excellent pace and balance stats, as well as a potential overall rating of 80+ in Career Mode.

Need to know: The Nottingham Forest hitman has been described as a “£40m to £50m striker” by club legend Kenny Burns, and is the Championship club's top scorer this season. Valued at just £2.5m, his speed, strength and finishing are magnificent in FIFA 17.

Need to know: Morris currently represents Seattle Sounders in MLS and, with blistering pace and a tremendous goalscoring record, has every chance of becoming a star of the United States national team. FIFA 17 rates him highly too, particularly in terms of his ability to develop in later years.

Need to know: Stoke's young winger has already enjoyed two title victories with Al Ahly in the Egyptian Premier League, as well as multiple appearances for his national side. With excellent pace, dribbling and short passing stats, Sobhi - who is still only 20 years old - is worth adding to any shortlist.