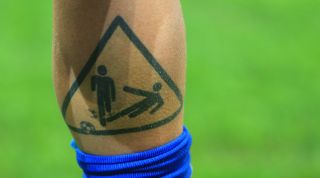 Ranger has never been far from controversy during his turbulent career, which is currently on hold after he was released by Southend in January 2018 for “reoccurring disciplinary issues”. The striker was once highly thought of by former club Newcastle, but the Londoner’s rap sheet has eclipsed his scoring record since he made his professional debut in 2009.

Still, at least referees have little trouble writing his name in their notebooks – and not just because they’re used to doing so. Ranger helpfully has his surname tattooed on the side of his head, a decision which ranks among the 26-year-old’s very worst.

The former River Plate, Internacional and, erm, Portsmouth attacker is known as El Cabezon ('The Big Headed') in his homeland of Argentina. That nickname was bestowed on D’Alessandro because of his disproportionately large bonce rather than any inflated sense of self, but his choice of tattoo suggests both meanings may be applicable.

After filling his arms with various designs, D’Alessandro’s next step in 2015 was to tattoo a picture of his own face on his stomach. Each to their own, we suppose.

There’s nothing more frustrating than a footballer who overestimates his own ability. By definition, every professional player possesses a fair amount of talent, but that doesn’t mean your team’s centre-back needs to take on multiple members of the opposition before attempting a wildly ambitious through-ball.

Thankfully, De Rossi knows his limitations; while he’s by no means a bad passer, the tough-tackling Italian is a ball-winner first and foremost. Whether he needed a tattoo on his leg to prove it is another question entirely.

This entire list could feasibly be dedicated to Ramos, who has turned his body into a canvas over the years. As well as a lion on his back and the Star of David on his arm, the Real Madrid captain has four individual markings on each finger of his left hand, which sounds a bit like overkill to us.

The most cryptic of those are the four numbers Ramos sports on his knuckles: 35, 90, 32, 19. The Spain international has invited his fans to guess the significance of each, but as yet he’s neither confirmed nor denied any of the theories. The mystery continues.

The former Bologna, Livorno, West Ham and Guangzhou Evergrande playmaker has always done things his way on the pitch. A fantastic player to watch on his day, the Italian has nonetheless been guilty of being too individualistic at times in his career, which helps explain why he only ever won 17 caps for his country.

His creative flair is reflected in his ink work, where occasional flashes of inspiration are overshadowed by some questionable decision-making. The worst of the lot has to be an overly large smiley face on Diamanti’s right calf, which gets creepier the longer you look at it.

They say love makes us do crazy things – almost definitely because of people like Mechelen's Vitas. In 2017, the Serbian defender professed his love for wife Andrijana by getting her facial features permanently etched all the way up his torso – a frankly terrifying recreation that does his spouse no justice.

We reckon a card and flowers would have done just fine, Uros.

Icardi’s goalscoring exploits for Inter mean he’s never far from the back pages in Italy, but he’s also generated his fair share of front-page headlines since moving to San Siro in 2013. The Argentine has been criticised by people both inside and outside the game for his relationship with the ex-wife of Maxi Lopez, once a team-mate of Icardi’s at Sampdoria.

Even those who gave the striker the benefit of the doubt when the love saga became public struggled to defend him when he subsequently inked the names of Lopez and Wanda Nara’s children on his arm. If reports in Argentina are to be believed, Lionel Messi – a friend of Lopez’s – was among the unimpressed.

When Pinilla walked into a tattoo parlour in 2014, he cast his mind back to the World Cup a few months earlier.

The scores were level in Chile’s last-16 clash with Brazil when the substitute striker arrowed a shot towards goal in the last minute of extra time. It was a fine strike, but one which thudded off the bar and proved to be a cruel ‘what if?’ after the Chileans lost on penalties.

Most players would want to forget such an agonising near-miss, but Pinilla has a permanent reminder of it on his back.

Step forward Polish shot-stopper Boruc, who can’t have been thinking straight when he picked this one off the menu. It gets worse too: the former Celtic, Southampton and current Bournemouth custodian opted to use his belly button to act as the poor primate’s backside. We’ll just have to turn the other cheek.

Bothroyd has enjoyed a varied career, which has taken him from north London to north Japan via spells in Wales, Italy and Thailand. The Arsenal youth product even befriended Al-Saadi Gaddafi, son of former Libyan leader Muammar, during his time at Perugia in the mid-2000s, inviting him to his wedding a few years later.

When he wasn’t busy masquerading as a footballer, Gaddafi Jr. headed up the Libyan Special Forces. Even when you consider the company he was keeping, it’s difficult to see how Bothroyd ever thought this ill-judged tattoo – the letters L-O-V-E spelled out with guns, a knife and a grenade – was a sensible idea.

The 26 maddest managerial sackings ever in football

Chin up, John, your Spanish language skills might have been a little off but at least your heart was in the right place. The former Aston Villa centre-forward decided to get a tattoo of a meaningful phrase on the side of his neck, opting for Ma Vie, Mes Règlès – ‘My Life, My Rules’. So far, so normal.

Except Carew had clearly dozed off in one too many Spanish lessons when he was at school. As a result, règlès was misspelt as régles – which directly translates as ‘menstruation’. Now where’s that receipt?