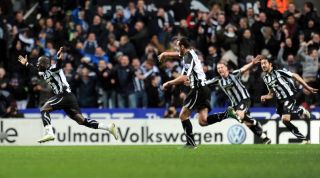 The history of English football's top flight is littered with one-hit wonders – players who only scored once in the English top flight, but made sure their goal was an absolute corker.

Immortalised through countless YouTube compilations – usually accompanied by a Eurodance soundtrack – here are our favourites...

Edman only lasted a single season at Tottenham but left one hell of a legacy among Spurs fans thanks to this swerving thunderbolt of a strike from all of 35 yards out against Liverpool at Anfield in April 2005. “It flew off my boot so fast that at first I didn’t realise it had gone in," the Swede said.

The £1.7 million that Aston Villa paid Oldham for three-time England international Barrett in February 1992 remains the Latics’ record transfer fee received for a player. The right-back went on to play 116 times for Villa in the league but scored just once – albeit with this goal combining spectacular vision with pinpoint accuracy.

One of the truly great Premier League volleys from Nalis, who arrived at newly-promoted Leicester in 2003 after a stint with Chievo in Serie A. The Frenchman may not have prevented the Foxes from going straight back down that season, but this stunning strike – unleashed while back-peddling, off-balance and at speed - inspired Leicester to a memorable 4-0 win over Leeds.

The football world was stunned by Tiote's sudden passing in February 2017, aged just 30. A former Ivory Coast international with 52 caps to his name and an Eredivisie title winner with Twente under Steve McClaren, Tiote is nevertheless best remembered for his famous volley for Newcastle against Arsenal in 2010, which sealed a sensational comeback from 4-0 down to 4-4.

Southall joined a select group of footballers to have played at all four levels of the Football League when he joined Bolton from Gillingham in 2001. Already well on his way to becoming a Gills legend, the midfielder would make just 18 Premier League appearances for the Trotters. They weren’t without their highlights, though, most notably with this goal against Newcastle.

Signed as an attacking midfielder, Jensen scored just one goal in 138 appearances for the Gunners. It was a belter, though – even if it did come in a 3-1 defeat to QPR in December 1994. A much-maligned figure, Arsenal fans would regularly shout “Shoot!” every time Jensen got the ball and later had t-shirts printed to commemorate his goal.

Martina became the first Curaçaoan to score in the Premier League after netting against Arsenal on Boxing Day 2015. Meeting a bobbling ball from all of 25 yards out, the half-volleyed strike with the outside of his boot that followed was stunning (and best appreciated with a reverse angle). He later said: "I saw the ball go in and I thought 'Oh my god’.”

More of a defensive water-carrier than goalscoring full-back, Jensen defied his status within Kevin Keegan’s swashbuckling Manchester City side of 2003 to score a spectacular volley against Leeds which sealed a 2-1 win and cemented the Sky Blues’ survival ahead of schedule. Meeting a right-wing Nicolas Anelka cross with a first-time strike, it was arguably the last great goal witnessed at Maine Road.

Recruited by Glenn Hoddle after impressing in a pre-season friendly for Orlando Pirates against Tottenham, Mabizela had already captained South Africa by the time he arrived at White Hart Lane. He was dogged with disciplinary issues throughout his single season at Spurs, however, and this solitary goal against Leicester only served to highlight the frustrating talent that lay beneath.

Cox took the long road to top-flight glory, leaving Reading in January 2008 for lowly Swindon Town in search of regular playing time. The gamble paid off; a move to West Brom for Premier League football followed, but his only reward came against Tottenham in April 2011 – a goal Spurs manager Harry Redknapp branded “world class”.

Signed to help bolster newly-promoted Reading’s faltering survival hopes in the January transfer window of 2008, the Czech midfielder could do little to prevent the Royals’ slide back into the Championship – the club won just four league games with him in their ranks. There were bright spots, though – most notably against Liverpool, where Matejovsky blasted home from 20 yards with a first-time shot that gave Reading an early lead they (predictably) failed to defend.

ANALYSIS What the hell happened to Alexis Sanchez? How the fireball footballer extinguished over time