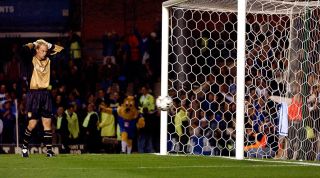 If it wasn’t already obvious that goal music has no place in football, ask Mark Flekken why it should be banned.

With the speakers at Duisburg’s MSV-Arena blaring, the Dutch goalkeeper didn’t realise his team’s goal had been disallowed. So while Ingolstadt launched a counter-attack, he retreated to the back of his net for a drink. Flekken turned around just in time to see Stefan Kutschke take advantage.

Fortunately for Duisburg, Flekken had been paying full attention when he saved a penalty earlier in the game (which ended in a 2-1 win for the home side) – otherwise his ill-timed hydration break could’ve been more costly.

You can’t score a goal direct from a throw-in, so Villa’s Peter Enckelman would have been better leaving this and letting it go for a corner, rather than miscontrolling and doubling Birmingham's 1-0 lead. But that’s easy to say in hindsight, isn’t it?

In fact, the Finnish goalkeeper has said he’s 90% sure he didn’t touch the ball that Olof Mellberg threw back to him – but with Robbie Savage haranguing the ref, the goal was given.

FFT’s favourite bit? When goaded by a pitch invader, Enckelman didn’t react because he “was at the wrong end of the stadium to get to the dressing room”. Smart bloke.

Proof that you don’t necessarily need to concede to hilariously mess up. This piece of contemporary performance art by Robin Zentner makes the list despite his team-mate saving the goalkeeper’s blushes and hoofing the ball into the stands – something the Mainz man probably wishes he’d done in the first place.

The 23-year-old appears to mistake the penalty spot for the ball, before miming a touch or two and then trying to pass the non-existent ball to his full-back. It’s a performance Marcel Marceau would be proud of, but probably not Mainz’s goalkeeping coach.

At first glance, this one just looks like bad luck. Those ’90s pitches weren’t exactly the velvet putting greens top-flight players are used to nowadays, particularly inside the penalty areas, so freak bobbles like this one that deceived Tim Flowers were just an occupational hazard, right?

Yes, but the Blackburn keeper hadn’t helped matters by kicking divots into the ground to help him keep track of his position inside the box. Guess what the ball hit before hopping over his shoulder...

If a striker gets to take home the match ball for scoring a hat-trick, what did Freiburg’s Oliver Baumann get to commemorate for this trio of horrific clangers against Hamburg?

Despite essentially making the same mistake twice for the first two goals, and letting a relatively tame shot get away from him to complete the miserable hat-trick, Freiburg fans still gave the goalkeeper a rousing reception at the final whistle. But would any of them have trusted him to hold their baby?

Thought sweeper-keepers were a modern invention? Check out how far off his line René Higuita is in this second-round match at Napoli’s San Paolo stadium during the 1990 World Cup.

The only problem is that the notoriously unpredictable Colombian keeper makes a total hash of out-dribbling Cameroon’s Roger Milla, and the 38-year-old runs through unopposed to put the ball into an empty net. Maybe stick to the scorpion kicks, eh René?

The best way to follow up a major blunder is to pull off a fine save to make up for it. Unfortunately for Ayr United, goalkeeper Jack Ruddy tries to make up for his initial headless chicken impression with something that’s arguably even worse.

To be fair, the Alloa player still has a bit to do as Ruddy desperately retreats to his line after slicing a clearance, but the flailing goalkeeper slips and lets the tame shot dribble past him into the goal. Not a great advert for Scottish League One football.

You could fill a whole list like this with England goalkeepers messing up – Joe Hart vs Iceland in 2016, Rob Green’s World Cup howler in 2010, Ronaldinho accidentally lobbing David Seaman in Japan – but there’s something quite special about this enthusiastic air shot from Paul Robinson. Particularly because it comes from a tame Gary Neville backpass.

The bobble is nowhere near as aggressive as the one that bamboozled Tim Flowers. In fact, it’s more of a delicate dink over the goalkeeper’s swinging foot than a full-on leap, which from a distance makes it look all the more calamitous. And that, kids, is why you should always aim a backpass outside of the post.

Nobody likes a diver, but Chiel Kramer found out the hard way that it’s best to wait until the ball’s out of play before chastising a player who’s tried to make a meal of a challenge.

With the ball at his feet, the Almere City goalkeeper takes the opportunity to fire a few choice words at the opposition striker, but RKC’s quick-thinking John Arne-Riise lookalike Pieter Langedijk nips in, takes the ball off Kramer’s toes and deposits it into the empty net. Ouch.

There are a couple of ways for goalkeepers to really make a name for themselves: scoring goals and letting in bad ones. In less than a minute, Leverkusen’s Hans-Jorg Butt manages both in this game against Schalke.

Having calmly slotted home a penalty at the right end, he and his Leverkusen team-mates are too quick to get back into their own half, giving Schalke the opportunity to shoot from kick-off. With Butt’s back turned as he makes his way back to his line, accepting congratulatory high-fives, hugs and pats on the back as he goes, the ball sails over his head and into the net. And just like that, his penalty taking heroics are forgotten.

It can be lonely being a goalkeeper, particularly when you’ve just dropped a clanger as bad as James Pullen does for Welling in this game against Chelmsford - but try telling that to the bloke audibly laughing his head off in the background.

With the scores level in the 93rd minute, one of the Welling defenders horribly slices a clearance that Pullen looks to be catching comfortably at his far post, but the ball squirms out of his hands and drops behind his head into the net. It’s probably fair to assume that the out-of-shot Mr. Chuckles is not a Welling fan.

Now “immortalised” by a dramatic reconstruction in a dreadful betting advert, Khalid Askri’s premature celebration in a penalty shootout saw him beaten by backspin.

After saving the ball low to his left, the Moroccan keeper is too busy showing the crowd who’s responsible to notice that the ball is rolling inexorably towards his goal line. What’s even worse is that Askri’s FAR Rabat side went on to lose the shootout and crashed out of the Moroccan cup.

LIST 12 great footballers who won absolutely nothing in their careers

FUNNY 10 of football's most amusing protests: sit-downs, hunger strikes... and a deckchair