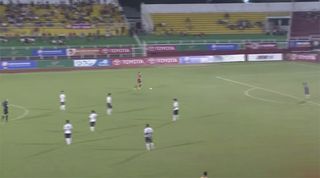 “It’s not for you to demand things that you’re not entitled to,” barked German delegate Hans Deckert at West Germany’s 1974 World Cup winner Uli Hoeness, fresh from victory over the Dutch.

Hoeness was furious when his wife Susi was asked to leave the team banquet at Munich’s Hilton Hotel. Skipper Franz Beckenbauer led the mass walkout to an adjacent bar, leaving the German suits alone with their steins.

2. Teenage netbuster gets the hook

“I believe they cause great harm to the wild salmon, and I’m not impressed,” 14-year-old Vancouver Island player Freyja Reed fumed in 2015. Her team’s new sponsor was Marine Harvest – the biggest operator of open net fish farms in Canada.

After venting via Facebook, Freyja was dropped for breaking club social media rules. “It’s not appropriate for players to complain about the sponsors online,” argued a club spokesman. Nothing like free speech…

3. Heart of the action

In September 2017, one disgruntled woman in south-west France had reached the end of her tether. Furious with the number of footballs that continued to land in her garden, the angry activist forced the suspension of an amateur match between Juillan III and Tarbes by taking her deckchair to the centre circle and refusing to move during play.

It worked as well: after a 45-minute discussion, the game was abandoned. No word since on whether she's left the pitch, though.

Sitting down during a game doesn't always get you what you wish for, however – just ask Bosnian second division side Bosna Visoko, whose lackadaisical attitude towards goal difference led to them putting pride ahead of points in October 2017.

Going into the dying embers of their game against Zvijezda 1-0 down, Bosna players took exception to an opposition player going down injured close to the sidelines in order to waste time. Having been miffed with a series of refereeing decisions throughout the game, they decided to sit down in protest.

The trouble was that Zvijezda players didn't, and scored twice more in injury time around their static adversaries to run out 3-0 winners. Hmm.

Christian Vieri built a reputation for throwing strops throughout his career. But even he excelled himself when, following the sale of strike partner Hernan Crespo to Chelsea in 2003, he refused to celebrate scoring for Inter. “I will play to my usual excellent standards, and continue to score plenty,” the not-so-modest forward supposedly huffed, “but I’ll take no pleasure playing at San Siro.”

“We’re doing this to highlight how the national team will suffer in the World Cup,” explained a ‘Common Sense FC’ spokesman in October 2013. The movement saw Brazil’s top-flight players sit on the field and cross their arms to demand changes to the fixture schedule.

7. A slap on the wristband

In June 2009, four Iranian stars were banned from international football after wearing green wristbands during a World Cup qualifier against South Korea. President Mahmoud Ahmadinejad had strongly objected to the players showing support for his election rival Mir-Hossein Mousavi, leader of the reformist Green Path of Hope movement.

It was later revealed that the internationals, including ex-Bayern Munich midfielder Ali Karimi, had been ‘retired’ after their gesture in Seoul. “I’ll never regret what I did,” insisted Karimi.

8. Bottom for a reason

In February 2017, a Vietnamese top-flight tussle between Ho Chi Minh City and bottom side Long An concluded bizarrely. With the score locked at 2-2 late on, Ho Chi Minh were handed a dodgy-looking penalty – and Long An were not amused. So much so, in fact, that their goalkeeper turned his back on the spot-kick and let it in without resistance.

Sure enough, his team-mates followed suit and Ho Chi Minh walked in two more goals before full-time to claim a 5-2 win. Unsurprisingly, Long An finished bottom with just two wins from their 26 league matches.

Unhappy Celaya players wore brown paper bags over their heads in a club photograph in March 2014, in protest at not having been paid for three months. Before their Second Division clash with CF Merida, an unnamed player for the Mexican Second Division side said: “As well as no wages, we’re also furious that we often have no running water or heating in our dressing room.”

Amid a huge storm of national interest, the owners miraculously switched back on the utilities and coughed up the cash within a fortnight.

BIG INTERVIEW Peter Crouch - "Thankfully I stuck it out at Liverpool. AtfirstI wanted to re-join Southampton as fast as possible..."

10. Injustice hard for Reed to stomach

In 1929, Leeds’s George Reed went down with a seriously dodgy belly. It wasn’t the first time Reed had succumbed to a tummy bug and, convinced he’d been poisoned in the team’s canteen, he boycotted the club’s grub.

Thinking Reed was being “elitist and unprofessional”, boss Dicky Ray threatened to drop him. It took Reed two months to end his half-arsed hunger strike, by which time he’d suffered a knee injury anyway.

This feature originally appeared in the April 2016 issue of FourFourTwo. Subscribe!