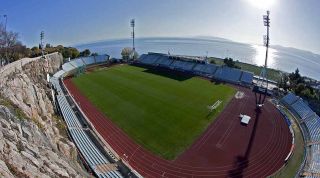 A list of Richard Keys’ most dunderheaded moments would essentially be Richard Keys’ life story, and the hirsute anchorman even found time to disrespect the innocent little Faroe Islands before his banter juggernaut jackknifed horribly into the central reservation. “Daft little ground, silly game, f**k off,” he opined about the Svangaskard in 2008, prior to a Scotland Euro 2008 qualifier – but he’d missed the point.

Located in the village of Toftir (population 832), this is a cold but comforting spot, so close to the ocean that a man in a boat is employed to collect all the balls that Frooi Benjaminsen and his friends hoof into the water. Wrap up warm.

The stadium itself is much like an English non-league set up – one main stand and a couple of terraces  accommodate just 1,300 spectators – and the quality of play isn’t stellar, but who cares when you can be on the slopes or a dog-pulled sled half an hour later? Mush!

Adult life can grind you down – setting up Council Tax direct debits, attending prostate examinations, the confusing world of Scart cables – so it’s no wonder that most architects, who have to train for seven years, end up as bleak, grim-faced individuals in rimless specs who worship Bauhaus and concrete.

Simple childish pleasures have been drummed out of most of ‘em, so kudos to Portuguese design guru Tomas Taveira, who presumably was mainlining Haribo and wearing a romper suit as he imagineered the Aveiro, a Lego-like structure that simply screams fun. Wonderful.

Billed as ‘the largest floating stadium in the world’ (all those other floating stadiums must be gently hopping with envy), this is one of those essentially pointless things that happens when someone has too much money, but we’re glad exists, anyway.

The bill for lost balls must be astounding, but it isn’t wayward Mitres that have truly blighted this pleasing-but-daft arena: a proposed Singapore Cup final here was cancelled because its metal beams cast off-putting shadows across the pitch. The football equivalent of Mötley Crüe buying a shark tank for their limo.

Much like Andorra’s Estadi, the Hasteinsvollur is a football field and little else, but makes our list for its breathtaking setting. Its tenants are the impossible-to-chant Íþróttabandalag Vestmannaeyja, three-time Icelandic champs, but for us it’d be hard to concentrate on the action when there’s a whacking great volcano looming over you, adding a frisson of impending death to any Úrvalsdeild league clash.

Croatia has become a favourite destination for middle-class Brits to head to and bang through a couple of Grishams and a mountain of olives every summer, and the Stadion Gospin Dolac looks like it’s straight out of a Sunday broadsheet travel supplement: wonderful architecture set on a luminous, gorgeous lake. It’s situated in Imotski – hometown of Croatian playmaking ledge Zvonimir Boban – and the arena boasts neat stands, a 4,000 capacity, and a 500m plunge into the water below if you’re feeling like a daring Dalmatian Tom Daley.

Spanking-new UEFA members Gibraltar boast a fanbase somehow more British than the British themselves, and the Victoria Stadium, tucked next to the runway and situated just off Winston Churchill Avenue, plays host to cricket, football and a music festival. Its neat, open West Stand is a delightful place to take in a game on a sunny day (i.e. most of the year), and also boasts a great view of the large lump of Rock that the place is most famous for.

More travel-brochure gorgeousness from the Croats: situated in Rijeka, the Kantrida has steep cliffs on one side (the remnants of an old quarry, from which the arena has been hewn) and the rippling Adriatic on the other, making it reminiscent of baseball’s most picturesque setting, AT&T Park in San Francisco.

Kantrida has been the home of HNK since WWII, and its fans, the Armada, gather on the West Stand, let off flares galore, and have plastered the city with murals displaying their love of The Whites. Croatia have played here 11 times and never lost.

Take this place in isolation and it’s not dissimilar from a Spotland or a Crown Ground – but with no disrespect to Rochdale or Accrington, its environs propel the setting beyond the ordinary. Located in Eibar, at the base of a steep Basque Country valley, the Ipurua is very beautiful indeed, and has also been home to something of a miracle: the minnows were promoted to La Liga for the first time ever in 2014, and despite being relegated last season, retained their place in the top tier, getting reinstated after Elche CF were sent down instead for financial mismanagement. Undoubtedly the most interesting place to see Messi, CR7 & Co. play this year.

Previously, and more pleasingly, known as Bluetongue Stadium due to a tie-in with a local lager brewer, the A-League side’s stadium is based in Gosford on the Central Coast of New South Wales. The view of the local estuary, Brisbane water – all palm trees and bobbing yachts – is so marvellous that the architects did the right thing and only terraced three sides of the ground: enough to house 20,000 fans (more likely to show up when the rugby league team is playing), but preserving a sea vista from every seat in the house.

Home to Puskas Akademia FC, the youth side of Videoton, the Pancho is utterly remarkable. It has a capacity of just 4,500, but its curving, wood-lined interior, designed by legendary Hungarian architect Imre Makovetz, gives the feel of a place of worship.

Pancho was Ferenc Puskas’s Spanish nickname, and there is no doubt who the deity is here: the Mightiest Magyar’s possessions are on display inside, making it part cathedral, part museum and part wonderful sports facility. Opened in 2014, there’s nothing else like it anywhere.

A slapdash, baffling, Russian-built construction in the former capital of the North-West Province of South Africa, the Mmabatho is either the disastrous byproduct of an over-tired architect who needed a cup of tea and a nap, or a work of postmodern genius. Home to Mafikeng FC – aka the Killer Bees – the 59,000 capacity asylum has a collection of tiers scattered at numerous different heights, not all of which properly face the pitch.