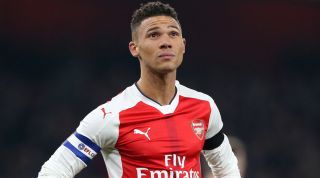 The dearth of English centre-backs means there’s still little danger around Smalling’s place in Gareth Southgate’s squad. However, after a poor season, it’s time to re-establish himself with a team that can guarantee he'll play football every week. That’s not going to happen at Manchester United.

The arrival of Victor Lindelof has pushed Smalling even further down the pecking order in a team that already offers limited opportunities for a player in his position. Foot and knee injuries hindered the 27-year-old in 2016/17, which meant he failed to emulate his stellar form of the previous campaign.

Smalling’s exit from Old Trafford is essential to his search for consistent minutes. If he can use that time to eradicate the clumsy mistakes that have littered recent performances, England may be able to go into next year’s World Cup with more confidence in their backline. There would be no shortage of takers.

Wimmer struggled to make an impact last year after a promising debut season in the Premier League. Spurs fans quickly warmed to the big centre-back when he ably deputised for Jan Vertonghen in 2015/16 and even saw the Belgian’s long-term place in doubt, such was Wimmer’s form.

However, the 24-year-old made just five league appearances last season, and was hooked at half-time against Manchester City after a disastrous performance. A lack of mobility and frequent mistakes have lost Wimmer the trust of Mauricio Pochettino, and the Tottenham manager has previously shown there’s no way back once that happens.

Yet the Austria international has potential. If Daniel Levy will yield to a somewhat affordable price (good luck with that), Wimmer would be an excellent signing for a mid-table club.

Like Smalling, full-back Gibbs is another Englishman who’s hit a wall after showing fantastic early potential. For a long while it looked like Gibbs would be the long-term successor to Ashley Cole after breaking into Arsenal’s team as a teenager. It’s jarring to notice that Gibbs is now 27, because he's progressed so little since.

Injuries dimmed the promising start to his senior career, before the arrival of Nacho Monreal in 2013 blocked his route back into the starting XI. Spaniard Monreal’s increasingly steady form led to declining opportunities for Gibbs, who made just 11 appearances in the Premier League last season. He’s now further from the England team than ever, and desperately needs a new club that will give him the game time required to build consistent form.

Defence aside, England’s other major worry ahead of Russia 2018 is central midfield. Few would be convinced that Fabian Delph is the answer. However, Manchester City brought him to the Etihad for a reason, and the situation is looking increasingly desperate for England after their midfield failings against France and Scotland.

It’s easy to forget how much Delph stood out in a torrid Aston Villa side before his move to Manchester. There’s no longer hope of any significant role at City, with Pep Guardiola’s side continuing to bring in expensive talent each year. Delph’s range of passing and discipline would be a welcome addition to most teams outside the top seven, though. Stoke are reportedly in talks and could provide the perfect environment for the 27-year-old to stand out once more. If this happens, there’s every chance he could add to his nine caps.

Ulloa’s situation at Leicester is mystifying. The 31-year-old furiously vowed never to play for the club again in January after he was refused a move to Sunderland. The Argentine eventually returned to play five more times under the Foxes’ new manager Craig Shakespeare, but a departure still seemed inevitable this summer.

However, multiple sources are now claiming he is close to signing a new deal at the King Power. It’s a strange decision – Ulloa seemed to have burned his bridges and is still unlikely to see more playing time given Leicester’s overstocked striking options. Kelechi Iheanacho will soon be arriving from Manchester City too.

Ulloa was excellent in his first season with Leicester, though, and scored crucial goals in their triumphant 2015/16 title run-in. His record in England has been solid, and he could prove the difference for a side fighting relegation in the Premier League or one chasing promotion in the Championship.

Daniel Sturridge. Divock Origi. One must go. With Jurgen Klopp recently praising Sturridge for his current physical condition, it may be Origi who departs Anfield first.

His heavy first touch or lack of movement often prevent him from making a mark, but he’s shown that talent is there. The Belgian is prone to bursts of good form, and is sometimes unplayable when he finds his rhythm. However, competing with Sturridge and Roberto Firmino has stalled Origi’s progress and he has struggled to find consistency.

If he can find a club where he can be the undisputed No.9, Origi may yet flourish. At 22, the Belgium international has time on his hands, but a move this summer could be a turning point for the promising young striker.

In the blue half of Merseyside, it may be time for Besic to reassess his options. The cruciate ligament injury he suffered in August 2016 has set the midfielder back significantly – and his best bet now may be to hit reset.

The Bosnia international made an encouraging start at Everton, combining aggression with controlled distribution. However, he’s missed a whole season and the landscape at Goodison Park has drastically altered. Idrissa Gueye and Morgan Schneiderlin have since arrived, blocking Besic’s route back into the first XI.

A move to a club slightly further down the table could be more beneficial for Besic in the long-term, as he reacquaints himself with Premier League football.

It’s inevitable, isn’t it? Someone will likely give in to Swansea’s huge asking price by the time Jim White has his yellow tie on; probably Everton, adding even more options to their midfield.

Sigurdsson’s stop-start stint at Spurs may make him hesitant to leap out of his relatively small pond again, but his quality is deserving of more than another relegation battle (sorry, Swansea fans). So often the saviour for his side last season, Sigurdsson is capable of being a game-changer for a top-half team with his innovative passing and deadly finishing.

Iceland’s star man must be keen for another go at proving himself with a bigger club and enjoying European football once more.

Tottenham’s 20-year-old midfielder may well be seeking a way out – at least for now. Pochettino tends to keep his favourite youth prospects nearby to instil his own ethos in young players early, rather than having to iron out bad habits picked up elsewhere. Nevertheless, Onomah is suffering from a lack of game time – particularly in his favoured position.

Those who watched England’s triumphant U20 World Cup campaign saw the Spurs academy graduate flourish as a deep-lying midfielder. When given a rare chance by Pochettino, Onomah has been stationed further forward or out wide.

A loan to a bottom-half Premier League club or Championship side may give him the opportunity to fulfil the promise he’d shown in Tottenham’s youth teams – and provide a route back into Pochettino’s plans further down the line.

Stints at Manchester City can prove damaging for some careers and, like Delph, Bony has suffered immensely from the extensive competition for places. The Ivorian earned a big-money move with his form at Swansea, but was never going to displace Sergio Aguero as the main man in Manchester. Even when the Argentine was injured, Bony failed to make his mark with a string of disappointing performances.

Perhaps unsuited to City’s more intense style, and having been disrupted by international duty and a bout of malaria, he's only scored six times since arriving in January 2015. A loan spell at Stoke was even less productive.

Bony is often pigeonholed as a targetman due to his build, but it’s the feather touch combined with his power that made him so devastating for Swansea. If another club is willing to take the gamble and give him time to recover his best form, Bony could provide entertainment and goals. Lots of them.

Before Manchester City arrived on the block, Chelsea were the original career-killers. Remy knew what would happen when he joined Chelsea in summer 2014, with the Blues having already signed Diego Costa and Didier Drogba (again), but he went there anyway.

The Frenchman isn’t going to set the Premier League alight, but he’s proven that he can score a few – a crucial asset to teams fighting relegation.

Costa may be going but Alvaro Morata has replaced him, while Michy Batshuayi is expected to get more minutes in 2017/18. As such, Remy's situation will remain unchanged if he stays at Chelsea beyond August. A loan at Crystal Palace failed to reinvigorate him – mainly due to injury – but a permanent move may give the striker some much-needed stability as he searches for the excellent form he found at Newcastle.

He loves the Toon Army and the Toon Army love him. But the relationship has had its problems for a while now, and a break-up needs to happen before things sour.

There’s been some memorable moments for Mitrovic at Newcastle, notably his late equaliser in the Tyne-Wear derby, but ultimately he's been something of a glorified cheerleader during his time in the north-east. That may sound harsh, but he played fewer games than Dwight Gayle and Ayoze Perez in the Championship last season, and only managed four league goals.

Mitrovic is still only 22, though, and arrived in England with an outstanding scoring record despite his inexperience and disciplinary issues. He may value his relationship with the Newcastle faithful, but the Serbian must concentrate his efforts on what he's paid to do before his talent goes to waste on the St James’ Park bench.