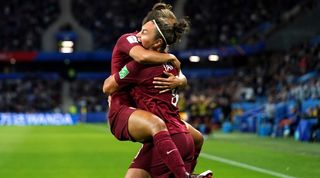 Having conceded 11 against Germany in the group stage in 2007, Vanina Correa might have felt she had a point to prove coming into this World Cup. Buoyed by keeping Argentina’s first ever World Cup clean sheet against Japan earlier this week, the 35-year-old was determined to follow suit against England. Her excellent one-handed save to deny Nikita Parris from the penalty spot was followed by a decent stop with her feet from Beth Mead’s low shot in the first half. She again denied Parris early in the second and she was thankful when a Jodie Taylor header was straight at her.

Though she did eventually concede - to Taylor - Correa’s performance was arguably enough to earn her player of the match. A remarkable achievement given she retired in 2012 after having twins and hadn’t entertained the idea of ever representing her country again until 2017. Argentina coach Carlos Borrello bumped into her at a domestic tournament and convinced her to make a sensational comeback. There were no signs of any ‘wobbling’ BBC commentators Sue Smith and Jonathan Pearce suggested there might be early on.

A debut a decade in the making

In the opposing goal was Chelsea goalkeeper Carly Telford, who has been part of Lionesses squads for over 10 years. Friday night in Le Havre was possibly the most special of her (now) 19 appearances to date though. Phil Neville selected the 31-year-old ahead of Karen Bardsley who started against Scotland, meaning Telford made her long-awaited major tournament debut for England and kept a clean sheet to boot - though in all honesty, she was hardly tested throughout.

Neville made three other changes: Abbie McManus for Millie Bright (who came off injured against Scotland); Jade Moore for Keira Walsh; and Taylor - who scored her seventh goal in nine major tournament appearances - for Ellen White.

The manager had intimated that he wouldn’t make many changes, stating the majority of those who played against Scotland deserved to play against Argentina. And for the most part, they did well in a difficult, physical and often frustrating match.

Though they currently sit in 37th in the FIFA rankings - three places below Thailand - Argentina are undoubtedly a better side than that position suggests. With no coach, no fixtures and no funding for two years following their failure to qualify for Canada 2015, qualifying for this tournament was an achievement in itself. The quality of their performances in France will hopefully mean the Argentinian Football Association continue to fund and support their development.

Job done though room for improvement

Though it took over an hour for England to make the breakthrough through a well-worked counter-attack, Neville will be encouraged by the performances of Fran Kirby, Jill Scott and Moore. The scoreline should arguably have been more and there’s room for improvement in the final third, especially the final ball (more deliveries akin to that assist please, Beth Mead) but overall, it’s job done and back to Nice to take on Japan on Wednesday.