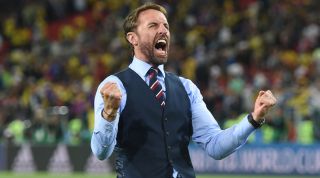 From the outside looking in, the pivotal part of Gareth Southgate’s revamping of England over the past year or so has been a marked change in mindset. The now-notorious ‘golden generation’ may not have been especially brattish in their behaviour, but they certainly brought with them an air of here-to-win-it hubris.

Perhaps that’s only natural for such high-achieving superstars as Frank Lampard, Rio Ferdinand et al, but however well it worked at their clubs, it proved a recipe for disaster each time an even-numbered summer came around.

This crop, by contrast, have achieved comparatively little and, in a weird but undeniable paradox, seem to thereby be in a far better position to achieve big things with England.

Southgate’s own role in this has been partly circumstantial. He was lucky enough to arrive just as the last of that generation were eyeing the retirement home, but it hasn’t all been a case of fortune. It’s worth noting that Sam Allardyce’s sole England squad, chosen three months before Southgate’s appointment, contained Joe Hart, Wayne Rooney, Theo Walcott and Phil Jagielka. All four have been phased out in Southgate’s short reign despite the fact that only one – Wayne Rooney – has expressly retired from England duty (and only then as a ceremonial face-saving exercise).

In short, Southgate has – very quietly, ensuring not to make any sort of a scene – done away with the final self-regarding stars of the past. He’s replaced them with footballers who are young, malleable and altogether more willing to submit their talents to collective success.

The element of age should not be overstated. Often it’s said that the more deep-thinking managers prefer to work with young players because of the fact that, at an impressionable age, they are more readily moulded at the coach’s will.

It is true of Pep Guardiola and Mauricio Pochettino among others, and Southgate’s model of management would appear to tally as well. Experience has not been discarded, exactly – a degree of balance has been maintained throughout – but every time there has been a straight choice between two players, invariably it's the younger one who has been favoured.

The result has been debuts handed to 13 players in under two years and a World Cup squad that’s the joint-second-youngest at the tournament, alongside France. It contains Jordan Pickford, Harry Maguire, Ruben Loftus-Cheek and Trent Alexander-Arnold – but not Hart, Chris Smalling, Jack Wilshere or Walcott.

This isn’t done for its own sake. For all the grizzled retorts that 'you can’t buy experience', there are plenty of vital traits that tend to run stronger in youngsters: fearlessness, exuberance, speed and an eagerness to impress. All have been on show in abundance when his side have been at its best.

There’s another equally crucial thing about young players: by dint of simple human nature, they are more appealing to the public. It’s not for nothing that the buzzword surrounding Southgate’s tyros over the past weeks has been “likeable”. At club level this is less relevant – if you’re successful enough, the majority fans will hate you regardless – but with England, where public disillusionment and on-pitch underachievement have long been locked in a vicious cycle, it's vital.

However, it isn’t just their youth that has rekindled the warmth towards the national side – there has been a marked about-turn in the way the players go about certain duties. While previous squads would barricade themselves away in five-star training camps, the media placated with platitudes, the current lot have clearly been encouraged to make their media appearances matter.

In Russia, the normally mind-numbing sit-down interviews have been genuinely engaging. After the Colombia win, countless selfies were taken with fans outside the ground. A week earlier, hours were spent playing darts and pool against members of the press pack. Faintly cringe-inducing? Perhaps, but as a symbolic gesture it has worked a treat.

On top of that is the simple fact that the players Southgate has placed at the centre of his set-up – Jesse Lingard, Marcus Rashford, Harry Kane, Dele Alli – give the basic impression of being relatable, buoyant and grounded human beings. Everything, in short, that their predecessors did not. And whether they actually were or not, or whether the current not actually are, is beside the point. When your only contact with the public is through the media, social and traditional, impressions count for everything.

4. Made the system the star

It’s not just the intangibles that Southgate has reshaped. In the most literal terms, it’s the team itself.

The previous MO for England managers was to crowbar as many star players as possible into their favoured positions – and for proof that this wasn’t limited to the days of The Gerrard-Lampard Conundrum, see Roy Hodgson’s hastily confected 4-1-4-1 setup at Euro 2016. For Southgate, the opposite applies. There is a clear and obvious blueprint in place, and if a discrepancy arises, it is the players who must adapt.

Settling on the 3-5-2 system that most of his players have become familiar with at club level, Southgate has gone about picking a team suitable for his tactics. It’s not just formation, but instincts and approach, too. Southgate prefers a patient, possession-based style, so the midfield is crammed with energy; Pickford gets the goalkeeper spot due to his distribution; and a back three that on paper might look bizarre – Maguire, John Stones and an out-of-position Kyle Walker – makes perfect sense.

Gary Cahill, Phil Jones and Chris Smalling, all defenders previously considered of a higher pedigree but inferior ball-players, watch on from the bench or the sofa.

Whatever happens from here, we’ll always have Moscow. A scrappy second-round victory over depleted mid-level opponents may not be much to cheer in any normal England tournament campaign. In fact, it would fit the template rather well; a precursor to the limp exit ahead. Yet a first successful penalty shootout in 22 years, with five failed attempts in the meantime, is no normal occasion.

What Messi and Ronaldo's World Cup exits say about this tournament

Ranked! Every England player based on their displays at the 2018 World Cup

First and foremost, Southgate has put to bed the plainly idiotic notion that shootouts are a lottery. As he said himself only last week: “It’s not about luck. It’s not about chance. It’s about performing a skill under pressure.”

That ability had eluded England for two decades and come to occupy a strange and prominent place in the national psyche; when The Prospect of Penalties had become subject to a toxic combination of obsession and fatalism, which in turn had effects on the field. England were terrified of penalties because they were so bad at it, and they were bad at it because they were so terrified.

Southgate, who may indeed have some experience of all this, has set about addressing the problem in a deeply sensible way. It involves drawing up a full list of takers (as opposed to the hands-up-if-you-want-one system that did for him), scrutinising the opposition, replicating the situation as close as possible and practising the hell out of it.

His talk of “owning the process” may have had more than a whiff of management speak about it, but the results are not to be argued with. It wasn’t just that England went through against Colombia, it was that they overcame a setback to do so, going uncowed by the ominous fact that they were the first team to miss, and showing the requisite steel thereafter. Process owned.