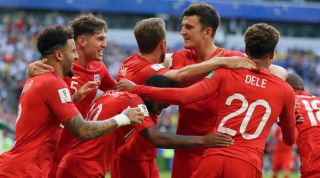 He’s been unfortunate. Alexander-Arnold's main positional rival, Kieran Trippier, has been one of England’s finest performers, meaning that he has had no real hope of being anything other than a last resort. That being said, he didn’t make the most of his selection against Belgium, looking out of his depth in a way that he rarely does for his club. To have posed a threat to Trippier, his delivery needed to be better and his attacking thrust more forceful than it ultimately was. Alexander-Arnold's time will come, but not this year.

As with the goalkeeper situation, centre-halves benefit from continuity and Gareth Southgate has a clear first-choice three. Jones featured against the Belgians but, barring injury to John Stones, Harry Maguire or Kyle Walker, he won’t be seen again. The Manchester United man hasn’t been bad, but he hasn’t been relevant either.

Fortunate to have made the squad and the chances of him seeing the pitch again seem very remote. At his best he’s a fascinatingly diverse forward, but he neither seems capable of reaching that level at the moment nor of fitting into England’s style of play.

For Cahill, read Phil Jones. As Southgate has established a first-choice trio in central defence, Cahill has been an incidental figure so far at this World Cup and will continue to be so barring injury or suspension. Yet on the basis of a fine goalline clearance against Belgium, which spared Jordan Pickford’s blushes, we’ll put him above Jones as the man more likely to come into the side.

Delph was selected partly because of the range of positions he’s able to cover. Pep Guardiola has made him into a passable full-back but, of course, he’s a natural midfielder. He's nowhere close to dislodging either Jordan Henderson or Ashley Young from the side, but he has contributed some useful minutes in the late stages of games and did help England to remove any threat of a Swedish comeback in the quarter-final.

Should he play no further part in this tournament, that converted penalty against Colombia will be enough to sustain him. Still, it’s hard to resist the conclusion that he’s been the odd man out in Russia. Southgate’s decision to play just one holding midfielder has left him without a place and, aside from substitute appearances in which he hasn’t looked at his best, he’s been a peripheral figure.

Rose is in a similar position to Trent Alexander-Arnold, although for different reasons. He certainly offers something different to Ashley Young and is the more attacking full-back, but what the latter has provided so far - balance, experience, reliable delivery - is probably worth more. It’s unfortunate, because without his injury Rose would have been a first choice at this tournament, but defensive balance is clearly more important than sentiment.

Not really a factor. Vardy’s pace certainly translates from the Premier League, but the nature of England’s opponents at this World Cup hasn’t really suited his game. He’s a forward who thrives upon finding space behind a defence, but every side faced to this point has employed a low-ish block. He could still be useful and remains a valuable counter-attacking asset, but he’s in no danger of starting.

Of those on the fringe, Rashford possibly has the strongest chance of forcing his way into the team - and with Dele Alli clearly not quite fit and Raheem Sterling a little short of form, he represents a more aggressive option should Southgate need one. He took a very fine penalty against Colombia, but his overall contribution has to been too sporadic to properly assess.

Someone who has really enhanced his reputation. There are still obvious flaws in Loftus-Cheek’s game and he still (understandably) lacks a little composure at this level, but he made a telling contribution in the final minutes against Tunisia and plays with the kind of force which has made him a useful alternative in attacking midfield. He’s in Russia for the sake of acclimatisation and the time to judge him will be years from now, but he’s certainly piqued the interest and seems to get stronger with every minute he spends on the pitch.

He doesn’t look fit. Alli finished the domestic season in good form, but the thigh injury he sustained against Tunisia has evidently disrupted his rhythm and left England without a properly functioning link between the midfield and Harry Kane. Even against Sweden, against whom he scored the critical second goal, he still looked well short of his best. More needed.

Very solid. A long shot for the squad at the turn of the year, but Young has justified his selection. The habit he has of cutting infield and back on to his right foot is an inconvenient restriction, but having a full-back conditioned by Jose Mourinho has proven no bad thing. He may not have offered the theoretical penetration that Rose could have provided, but the balance and positioning sense he offers has been valuable.

His detractors will highlight the lack of goals, and while that is a concern, Sterling’s more fundamental work has been typically good. His movement has made him a nuisance. It causes small problems for the Colombians and major ones for the Swedes. End product would be nice, there's no point in pretending otherwise, but his contribution remains positive and the criticism he seems to attract is little more than nonsense.

A performance which needs context: he’s playing a position he has had to learn, rather than one in which he’s natural. With that in mind, he’s done well - and his speed is incredibly useful as both a safety net and as a catalyst at the beginning of moves from deep.

Nevertheless, security remains a little bit of an issue and, as has been the case throughout his career, he has shown himself prone to the occasional lapse. He was very fortunate that Juan Cuadrado lashed so wildly at the chance he presented to him in the last-16 game against Colombia.

He’s certainly been deserving of his place, but until the Sweden game he’d been denied the chance to show his real worth up to this point. That, though, was an excellent performance - with the exception of Jordon Pickford he was arguably England's best player. His stock has certainly risen and he's becoming increasingly important as the tournament has progressed.

Lots of fun. Maguire isn’t the most sound technical defender, but he’s a force - and a valuable one, shown most vividly during his part in Harry Kane’s second goal against Tunisia. He can look slightly awkward on the left side of the back three, as a right-footed player often does, but that hasn’t really harmed him yet. While he’s sometimes portrayed as a simple stopper, he’s actually shown himself to be a fine ball-carrier - a couple of his surges into midfield have been really eye-catching.

He has certainly justified his selection and, given the fractious tone of that Colombia game, was a valuable physical asset to have on the field and someone never likely to be intimidated. Against Sweden, the tone was quieter: he scored that thumping header to give England the lead, but his defending was composed and impressive. Maguire isn't just rough and tumble, or just a huge forehead, he's a proper player too.

Stones’ value can really be seen in the way England have played. Without his composure on the ball, their build-up wouldn’t look nearly as modern. The side may have issues with chance creation, but they’ve had no problem moving the ball beyond a high-press and into midfield. Stones has been essential to that.

He’s shown some fire too. He may look like a mild-mannered sort of footballer, but he was at the head of the queue to meet the Colombian intimidation on Tuesday and the first to wave them farewell once the penalty competition was won. That may not be a particularly admirable trait, but it’s been a necessary one. He’s tougher than he looks.

A symbol of Southgate’s selection policy, Lingard has been excellent. He's not the most talented player, neither is he the most obvious for his position, but his role has been designed around what he can do and that’s proved a triumph. Two years ago, England were eliminated from a European Championship on account of their reticence; Roy Hodgson blocked up his midfield and the side was horribly static as a result.

Lingard has been an answer to that. He is someone willing to drive beyond his position into attacking areas and, while England are still struggling to create real chances from open play, his presence has definitely helped. And what a goal, too – that curling effort against Panama was flawless.

Having not really been involved through the first three games, Pickford has shot up the list for obvious reasons. Yes, the penalty save was priceless, but the stop he made from Mateus Uribe at the end of normal time was truly stunning; one of the best an England goalkeeper has ever made at an international tournament. The saves made against the Swedish might not have been quite that good, but they were still critical - and they also showed the range of his shot-stopping too. Shots and headers flew in from his left, his right, and towards the top of his net, and he shut the door on all of them.

The more mundane aspects of Pickford’s game have also been sound. His handling has been secure, his positioning good, and his kicking – as you’d expect – highly reliable. It’s not a debate anymore: he is clearly his country’s first choice.

A real revelation. Trippier doesn’t really fit the modern archetype of wing-back play, because he isn’t the quickest and is more stable than explosive. Nevertheless, his work in securing the right side of a defence has been critical, given Kyle Walker’s lack of familiarity in his own role. It’s quite the testament to him - to both of them, in fact - that England haven’t looked noticeably vulnerable in that area.

And the delivery, of course. His set-pieces have been of the highest standard and, given the side’s dependency on dead-ball situations, critical to progress. As was his penalty against Colombia, which was nerveless, utterly convincing and complicit in cranking the pressure up on the next taker, Carlos Bacca.

Ranked! The 10 best goals of the World Cup (so far)

Quiz! Can you name all 28 England players to take a shootout penalty?

A captain and a leader, but also a performer of the highest calibre. When England have needed Kane in this tournament, he has answered their call without fail - in stoppage time on the opening night, from the penalty spot twice against Panama, and twice more against the Colombians.

Beyond the goals, his all-round contribution has also been excellent. He doesn’t quite have the surrounding resources he enjoys at Tottenham, but he’s still replicated the breadth role he plays for Mauricio Pochettino. He’s effective at leading the line, but his willingness to drop into deeper positions and spread play has helped to foster some much-needed attacking continuity.

Southgate’s forward line is clearly a work in progress, but Kane is already the complete article. So far, this World Cup is proving yet another validation of his worth.