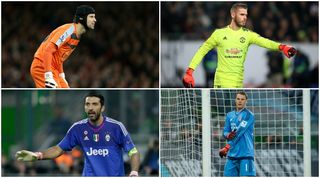 Here are the best six goalkeepers in the world, as decided by FFT and our trusty band of contributors from around the globe. Agree with our list? If not, tell us in the comments below or on Twitter or Facebook.

Four months is a long time in football. Back in August, Real Madrid fans were cursing their luck when a deal to sign David de Gea fell through; now, most of them are probably grateful the move didn't come to fruition. Navas has stepped up to the plate tremendously well this term, often pulling off some outrageous saves to prevent Rafael Benitez from coming under even more pressure.

Never has a signing felt as obvious as Arsenal's acquisition of Cech in the summer. The experienced gloveman found playing time hard to come by at Chelsea last season, but he's provided everything Gunners supporters were hoping for this term: assuredness, leadership and downright good goalkeeping.

Like a fine Italian wine, the evergreen Buffon seems to get better with age. Honing in on his 38th birthday, Juventus and Italy's No.1 still possesses sharp reflexes and a useful penchant for a clean sheet or two. Captained Juve to a domestic double and the Champions League final in 2014/15.

It's often said that foreign goalkeepers require a bedding-in period to adjust to the physicality of the Premier League, but Courtois looked confident in his new environment from the first minute of his debut in August 2014. He's got even better since then, dominating his penalty area by catching crosses - punchers take note - and stopping plenty of shots that he has no right to stop.

Manchester United fans probably haven't been enjoying 2015/16 too much, but the first half of the season could have been even worse were it not for Real Madrid's dodgy fax machine. A paperwork problem saw De Gea stay put at Old Trafford this summer, with his exploits between the sticks contributing greatly to United's excellent defensive record.

Calling Neuer a goalkeeper does not really tell the whole story. The Bayern Munich shot-stopper has taken the role of sweeper-keeper to another level, with the 29-year-old regularly spotted closer to the halfway line than his own penalty box. He does do some excellent work in more conventional areas, though, and is well-deserving of his place in the overall top 10.