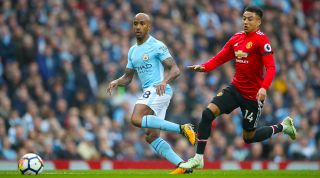 Things couldn’t have gotten much worse for Arnautovic when he was subbed off against Brighton in October. That was his seventh appearance in a West Ham shirt, but the Austrian had still failed to score or set up a single goal. Over that same period, he'd been sent off once and lasted the full 90 minutes just twice. The £20 million fee paid to sign him looked rash.

Fortunately for both player and club, things have changed since David Moyes took charge. Since being installed up front by the Scot, Arnautovic has scored all of his goals (10) and managed all of his assists (4) for the season, from only 17 appearances. Two of those goals came against his old manager, Mark Hughes, in a huge 3-0 win over fellow strugglers Southampton.

Freed from the defensive duties his old wide role came with, the 28-year-old has looked rejuvenated. Moyes has even compared him to a certain iconic Swede: “He is a little bit of a Zlatan [Ibrahimovic] in as much as the players look to him,” said the Hammers chief.

Benjamin Mendy was expected to fill the left-sided full-back spot within Pep Guardiola’s 4-3-3 system after joining Manchester City in a £52 million deal last summer. However, two months after signing, the Frenchman ruptured his anterior cruciate ligament. With no obvious candidate to replace him, Delph stepped in.

Despite his unfamiliarity with the left-back role, the combative former midfielder quickly excelled. His settling period was undoubtedly helped by the fact that Guardiola’s full-backs often act as central midfielders during attacking moves, drifting infield to support build-up.

Having previously been no more than a fringe squad player at the Etihad, Delph’s conversion offers hope of a long-term future at Manchester City. Through determination and versatility, the Englishman has made it into his manager’s good books. “It’s not easy when for a long period you don’t play,” Guardiola said. “It means a lot... he’s a guy who always tries to help.”

With games to spare, Lingard broke his own personal record for league appearances in a single season – and doubled his previous best tallies for both goals and assists in a Manchester United shirt. The 25-year-old's newfound levels of performance are down to a subtle tactical modification.

Before 2017/18, Lingard was no more than a utility player who was brought into the side on the wing when necessary. Now, however, the Englishman is a pivotal figure in a busy attacking midfield role. He has relished the added responsibilities so much, in fact, that there is now serious debate about whether he should start ahead of Dele Alli for England this summer.

A hard worker and team player, Lingard is ever-willing to press in attack and his pace makes him a threat on the counter-attack. With those attributes in mind, it’s clear why Jose Mourinho has grown to love him.

Gross always had a good reputation for chance creation back in Germany. Since joining Brighton from Ingolstadt, the 26-year-old has been pushed into a more advanced central role – where his creativity has come to the fore once again.

Gross was previously seen as a versatile operator capable of filling in on the wing or in central midfield, but has acted as a second striker in Chris Hughton’s favoured 4-4-1-1 system for the majority of this campaign. Not only has he established a strong relationship with Glenn Murray, setting up a third of the striker’s 12 league goals, but he’s grown into one of the Premier League’s most productive playmakers.

Only six players – Mesut Ozil, Kevin De Bruyne, Cesc Fabregas, Alexis Sanchez, Eden Hazard and Christian Eriksen – have made more key passes per game in 2017/18. Gross attributes such form to his role within the team shape, saying: “In this system I come into situations where I can shoot or make the last pass.”

Burnley are unashamedly committed to direct attacking football in an era that increasingly frowns on long balls. They play more of these types of pass, on average, than any other Premier League team – and they have success with it. Hendrick, moved by Sean Dyche from central midfield to No.10, has been important to the strategy.

Most players in his role constantly look to get on the ball and make things happen, but the Irishman's take is unorthodox. He almost acts as a second striker, supporting the lone frontman both in pressing and by getting into position to secure second balls.

Hendrick’s work ethic, endurance and awareness are key to Burnley’s style within their 4-4-1-1 system. “He is more of a running No.10,” Dyche said of his player. “He’ll join in, back the play, recover when he needs to… Jeff will go and work for the ball.”

Since his appointment at West Ham last November, David Moyes has often used a back three. And, whether the Scot has gone for a 3-5-2 or a 3-4-3, Cresswell has been central to his defensive line. The former left-back has frequently been brought inside to the left-sided centre-back berth, and thrived in his new position too.

Cresswell's primary quality was his crossing as a full-back, so it’s no surprise that he is now often a centre-back tasked with bringing the ball out. His presence has improved the team’s build-up, allowing West Ham to play through pressure.

This particular tactical tweak has not only worked for Cresswell, but also for Arthur Masuaku – the attack-minded Frenchman has been able to showcase his exceptional dribbling skills since taking up the vacant left-wing-back slot.

“I've [spoken] about this for about six years… where I’d like to play,” Oxlade-Chamberlain told Liverpool’s official website upon joining the club last August. “I just say I'd like to be an attacking midfielder.”

Tired of being deployed at wing-back during his last season with Arsenal, the 24-year-old’s tactical wish eventually came true in his maiden campaign at Anfield. Initially trialled on the right of a four, he had been a colossal performer since switching to a more central position in Jurgen Klopp’s three-man midfield.

That was, until injury bit in the Champions League semi-final first leg against Roma – ruling him out for the rest of the season, and World Cup. It was a huge shame for club and country: Oxlade-Chamberlain's energy, speed and aggression on the ball had been integral to Liverpool’s upturn, and his goals in separate home wins over Manchester City – one in the Premier League, one in the Champions League – demonstrated the potency he added to his team’s attacking transitions.

Quiz! Can you name the 52 permanent managers who've been relegated from the Premier League?

Before his knee injury earlier this term, Zaha epitomised Crystal Palace’s wing-focused attacking style. As one of the Premier League’s most effective dribblers, he was tasked with beating his man to engineer scoring opportunities. But since Roy Hodgson took charge, the team’s style – and Zaha’s function – has altered.

The Ivorian has regularly led the line within Hodgson’s preferred 4-4-2, using his pace and skill in more advanced areas of the pitch.

Having now bettered his personal best for goals in a single season (eight now), Zaha is a more consistent and direct threat to opposition backlines. His manager, delighted at how well his experiment has paid off, has nothing but praise for his new frontman. “We can’t ask any more than what he’s giving us,” Hodgson said.