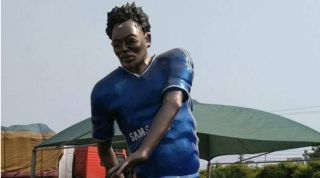 Former Ghana international Essien is an icon in his home country, having enjoyed an illustrious career which has taken in spells with Lyon, Chelsea and Real Madrid.

The 35-year-old now plays for Persib Bandung in Indonesia, but in the twilight years of his glittering career, one Ghanaian sculptor has taken on the enviable task of re-creating Essien in Kumasi, Ghana's second city.

As you can see below, the results are... well, not that great.

The bold decision to give Essien a pot belly raises one of many questions (just planning ahead, perhaps?).