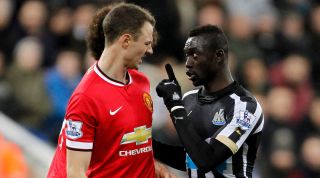 Despite the Newcastle striker’s full apology, young footballers across the country are already imitating his actions in the hope of reaching the Premier League.

Just hours after Cisse’s confrontation with Evans, youth games across the country were reduced to spitting contests, with the ball virtually forgotten in a puddle of phlegm.

In a vain attempt to impress scouts who may be watching, academy players have been exchanging volleys of sputum until their throats were bone dry and their shirts were dripping with mucus.

“It’s my dream to make it to the Premier League and I’ll do what it takes, even if that means a repeated, gruelling schedule of expectoration,” 16-year-old Ed Perrin told FourFourTwo.

“All these years I’ve been dribbling a ball around cones, when actually I should’ve been hoicking gob balls at a moving target.

“I might as well leave my boots at home when I leave for training this evening, and turn up in a poncho and goggles with a pack of chewing gum.”

However, while many young hopefuls like Perrin have been inspired by Cisse’s display against Manchester United, few will have what it takes to follow in his footsteps.

“We can all hawk up a decent loogie from time to time, but doing that day in, day out at the top level is something else,” Perrin acknowledged.

“When it’s the 90th minute and your throat is parched, that’s when you see whether you can really perform at the highest level.”

Perrin admitted that while he had a lot of work to do to imitate his Premier League role models, he was now somewhat relieved that he wouldn’t have to drive a sports car, spit-roast a legion of comely ladies, get a £500 haircut or talk entirely in cliched soundbites.