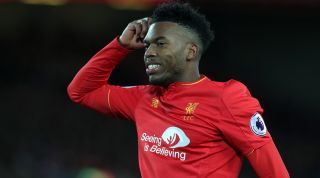 Jurgen Klopp’s appearance as a pundit on Sky Sports’ Monday Night Football last month has given the impression that Liverpool aren’t so concerned with positioning or formations. That isn’t entirely true – the side is organised defensively, even if they do struggle against set-pieces.

“You like to say that they are the last wonder of the world in attacking football, but they are also a team that defends and thinks defensively,” begrudged Manchester United manager Jose Mourinho after Monday night’s 0-0 draw at Anfield.

Liverpool rely on flexibility in the final third, with a great onus on the forwards to improvise and make clever runs. This movement inevitably opens up defences, and the frontmen’s pressing off the ball helps enable their team’s quick transitions.

Roberto Firmino has mainly led the line this season, as his work-rate and coordinated harassing of centre-backs helps create goalscoring opportunities. The former Hoffenheim attacker moves centre-backs out of their line with his lateral motion and swift changes of direction.

Against United, however, Daniel Sturridge was tasked with playing as the lone striker – a role he fulfilled on a number of occasions under Brendan Rodgers, but less so for Klopp. He has now started only four matches in the Premier League this season and is yet to complete 90 minutes.

Adam Lallana had trained for only two days, which meant that Philippe Coutinho dropped back into midfield and Firmino took up the left flank. The adaptability of both Brazilians is a huge reason why Liverpool have looked such a threat going forward this season, along with the added contributions of Lallana and Sadio Mané.

However, with Sturridge as the central forward they can look a little disjointed. Liverpool’s best performance so far this campaign was against Leicester, when the England striker was directly involved in two of the goals (including a sublime backheel assist), but the reigning champions surprisingly kept quite a high line.

Coutinho and Firmino combined 14 times against United, while Sturridge managed just three passes to Firmino and received only two. Liverpool mustered just three shots in the opening hour of the match, but six after Sturridge was replaced by Lallana in the final half-hour.

It’s not entirely the England striker’s fault, and he wasn’t the only forward lacking incision in the game, but Klopp’s men look better without him right now. His added fitness and injury problems mean that he can’t regularly be relied upon.

Liverpool have averaged a league goal every 43 minutes when Sturridge has been on the pitch so far this term, which improves to 38 without him. That’s not a definitive statistic, although few clubs will have a better ratio without their first-choice striker – especially as he hasn’t yet scored himself.

“It was a really difficult game for a striker the way that we played today – it was not easy to enjoy [for him],” Klopp admitted after the game. “Everyone wanted to give the ball to him, but you have to play the best situations.”

The difference with his United counterpart was obvious, although Mourinho’s team clearly play to the strengths of Zlatan Ibrahimovic. The Swede is more of a physical striker, so can make an impact on his opposing centre-backs by using his strength and power to cause unrest.

Ibrahimovic made a nuisance of himself against Joel Matip throughout the opening 45 minutes; the latter looked uncharacteristically sloppy in possession, giving the ball away three times in the space of three minutes.

Matip did recover well and dealt superbly with man-marking Ibrahimovic as the striker tried his clever flicks and touches. The Swedish hitman did provide one of an unremarkable game’s standout moments, though, when he played a no-look pass to Antonio Valencia just before the break.

“We couldn’t get rid of the hectic, that was the problem,” Klopp lamented. “Hectic is great when you are defending and in some situations like this, but as soon as you get the ball you have to calm down immediately.”

The lack of intensity and composure from the home side, along with Mourinho’s gameplan to frustrate, meant it was difficult to draw too many conclusions – but the signs do look ominous for Sturridge. Mourinho felt that his team controlled the match tactically and contained Liverpool’s forward projection, but this happened much less frequently once Sturridge was subbed off.

Who is the WORST pundit in the country? You decide...

“How many shots on target did Liverpool have today? Two! Two shots with 65% possession – you have to be critical of Liverpool,” said the Portuguese coach mischievously, in response to a question about his expensively assembled outfit’s lack of ball retention in the 90 minutes.

Mourinho came back into the press room afterwards when most of the journalists had left to argue that his own analysts had United’s possession figures at 42%, and not the 35% that had been suggested. As they had just one shot on target to Liverpool’s three, it made his first plea seem even more irrelevant.