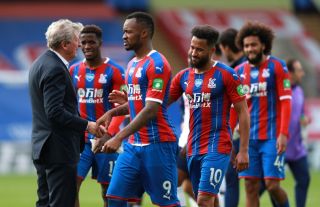 Crystal Palace have to become younger. Much younger. Of their 14 most regularly used players in 2019/20, not one was the under the age of 27. In addition to which, only Wilfried Zaha was younger than 28.

That has to change, not least because the key to advancement for a club in Palace’s position lies in buying underdeveloped players, benefitting from their growth, and then making a profit from their eventual sale. It’s the virtuous cycle of improvement and the only avenue of advancement available to clubs who don’t have access to an oligarch’s money pit or the reserves of a sovereign wealth fund.

The summer has begun well at Selhurst Park. Nathan Ferguson is a highly promising full-back who at 19 will not only improve, but also only become more valuable. Looking across the rest of Roy Hodgson’s side, however, such fertility is harder to find. In fact, with the exception of Zaha and the various free-transfers, there isn’t a single player at the club who could be sold for anything other than a significant loss.

To put it in starker terms, until Ferguson’s arrival Roy Hodgson probably wasn’t managing anyone who was obviously improving. Some of his players are clinging manfully to their primes, others enjoyed good form at different parts of 2019/20, but Hodgson has nobody under his charge who is transitioning in a positive direction – nobody who is actually evolving.

When that’s the case, it’s difficult to know how a football club can maintain a positive direction. On top of the general limitations created by Selhurst Park’s size and location, and the relative wealth of their ownership group, Palace must also contend with the ongoing effects of the pandemic, and the millions of pounds of lost revenue which threaten the futures of clubs up and down the country and all over the world.

These are obviously unusual times for which nobody could have been expected to prepare properly, but this situation serves to illustrate the plight that sides like Palace – who seem built exclusively for the here and now – invite upon themselves. While some clubs can assuage the pressure they face with lucrative sales, their only real asset is Zaha; there are no chips to trade in, there’s nothing to trade away.

EUROPE Who will win the 2019/20 Champions League? FourFourTwo writers make their predictions

Zaha himself is an interesting case and his situation characterises the myopia. He’s a glorious footballer. A lethal attacking weapon and understandably a fan favourite. Nevertheless, there has always been an optimal selling point for players like that, regardless of their perceived worth.

The sale of Zaha at the top of the market, for instance, might have raised upwards of £70m. With the right sporting direction, that £70m might have been reinvested in four or five players under the age of 23, each of whom would then have had the opportunity to grow and appreciate, becoming increasingly more valuable in a technical and material sense.

One asset becomes three, three becomes six. So on and so force. It’s a simplification which makes scouting and talent identification sound far easier than it is, but it’s really the only way for most clubs to be sustainable in the modern era. It doesn’t mean that Palace’s transfer policy should consist solely of young, pliable prospects, because mature talent is essential to any team’s chemistry. Nevertheless, there’s a balance to find. Young players are football’s nearest equivalent of government bonds and for anyone other than the biggest investors, they’re an essential part of club-building strategy.

Hopefully the addition of Nathan Ferguson signals Palace’s growing belief in this reality. If not, though, what do they think will be the eventual outcome of always spending money that they never get back?