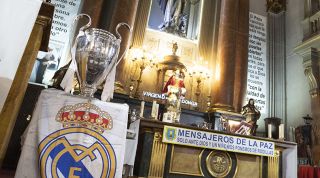 It's a very different kind of Champions League now. Straight knockout ties from the quarter-finals, held in neutral venues in Portugal.

Back then, we made our predictions. And not only did none of us predict a global pandemic halting all football, but we also largely failed to predict the Champions League winners – only two of us named a side that managed to get through the next round, and one was the writer doing work experience with us (well done, Harry, and well done, PSG).

That's right. Last year's winners Liverpool are out. Real Madrid are out. Juventus are out.

There's a couple of big names still in (Barcelona, Bayern Munich), a couple of pretenders to Europe's crown (Manchester City, PSG), and a couple of surprise inclusions (Atalanta, Lyon). And with only a few games left, it really could be any of them.

So we thought we'd put it to the trusty FFT team. Who do our writers predict will lift the European Cup this season?

Those wondering whether Bayern would still remember how to play football by the time they faced Chelsea in their last-16 second leg were answered fairly emphatically. Despite their last competitive match coming a month previously, the German giants wiped the floor with Frank Lampard's side for just their 18th consecutive win of 2019/20, trouncing the Blues 4-1 in a ruthless display.

Since winning the competition six years ago, Bayern have been semi-finalists four times and will be more desperate than any other side to go at least one better this time. Their team is balanced, settled, and in Robert Lewandowski, Die Roten boast a striker with a scarcely believable 53 goals from 43 matches this term – 13 of which have come in Europe's premier competition. They will have to win the hard way, with Barcelona and then a likely semi-final against Manchester City standing in their way, but Hansi Flick's side have the experience, quality and cunning to beat the best.

LONGREAD Ready to take over from Messi and Ronaldo? Why Kylian Mbappe could define the next era of football

Unlike many European leagues, Ligue 1 decided to call the rest of the season off during the height of coronavirus. The result is that Paris Saint-Germain have only played two competitive games since they dumped Borussia Dortmund out of the Champions League in March.

However, both of those games have been finals – the French Cup and the French League Cup – and they've won them both.

And, as we saw when Lyon held out against Juventus last week, teams who have resumed their season do not necessarily hold the upper hand over those who haven't.

Then, we have the draw to factor in. PSG take on surprise package Atalanta first, then will face either an Timo Werner-less RB Leipzig or an Atletico Madrid side drafting in academy prospects to make up for losing Angel Correa and Sime Vrsaljko to positive coronavirus tests. The path to the final will never be more favourable.

Kylian Mbappe is back in training after injury, though might not be ready for the first game. Even without him, though, they still boast a team of Neymar, Mauro Icardi, Keylor Navas, Thiago Silva, Ander Herrera, Marquinhos, Angel Di Maria...

There's a good opportunity for them to hit their stride as they go into the final.

I backed City to win the Champions League in mid-February, and see no reason to change my mind.

True, the narrative of a ban from next year's competition – and any motivation that might have brought with it - has now been removed. But on their day, City are the most talented team in the last eight.

You'd fancy them to beat Lyon – even if they found it surprisingly tricky against them in the group stage in 2018/19. Then it would be a battle with one of Pep Guardiola's old clubs, Bayern or Barcelona. Bayern in particular would be tough, arguably tougher than the final.

But with Liverpool out, City may never get a better chance than this season. In November, Guardiola and Jurgen Klopp joked that they wouldn't mind swapping trophies this season. Liverpool have done their bit, exchanging the Champions League for the Premier League. Now it's City's turn to show they can conquer Europe.

Had the past two Champions League seasons had only one-legged ties from the quarterfinal stage onwards, Barcelona would have defeated Roma 4-1 in the 2018 quarters and Liverpool 3-0 in the semis last year. Now, that's some cracking form.

As FFT’s resident optimist, I’m choosing to judge Barcelona solely on those first-leg performances, as that's all we'll be getting this time around. No quickly-taken corners by English tyros can stop them this year!

Barcelona still boast the world’s best player, with Messi's goal against Napoli in the last round the kind only he could dream of scoring. An early exit in the Copa Del Rey, followed by their failure to overhaul Real Madrid in La Liga leaves the Champions League as their last shot at glory. It’s not often Barca end a season empty-handed and this one will be no different.

ATALANTA ‘The Goddess’ have reached the quarter-finals in their debut Champions League campaign, but revelry has been muted in Bergamo: the epicentre of Italy’s coronavirus outbreak.

The easy money may be on Atletico, Bayern or any other team who can actually defend - but with the ties only 90 minutes long and home advantage wiped, more can go wrong for the big guns. Atalanta, meanwhile, are extremely complex to defend against, produce heavy overloads and switch play quickly: on hot nights in Portugal – weeks or months since your last competitive football – that could be a nightmare to defend against. They’ve only lost twice since Christmas, too.

The odds are stacked against them even going through against Paris Saint-Germain, let alone winning. But wouldn’t it be peak 2020 for La Dea to become European champions?