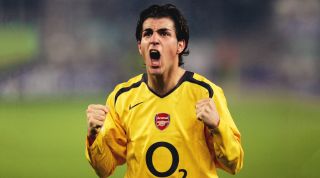 It’s hard to know what history will say of Cesc Fabregas, but it’ll probably underrate him. For such a formidable footballer, after all, it’s a debate as to whether he’s been a legend at any club he’s played for.

At 15, he was training with the Invincibles. At 21, he was Arsenal club captain. At 23, he’d provided the assist to the most important goal in his country’s history and at 24, he was playing for arguably the greatest side of all time. All at an age before Thierry Henry had even won his first English title.

What may be forgotten is how beautifully he played the game. Cesc Fabregas was a conductor of orchestras. A creator and a crafter, the like of which only surfaces a few times a generation; a playmaker who strips away the noise and interlinks with effortlessness. Fabregas at his pomp wasn’t just devastating, he was artistic.

Players of such grace don’t command the same goal tallies of more conventional heroes, so it’s up to the fans they touch to uphold their legacies. That’s the case at least for Andrea Pirlo, Dennis Bergkamp, David Silva and Eric Cantona.

The contradiction with Fabregas is that he severed ties with the fans most likely to do that - and never laid quite the same roots at Barcelona or Chelsea.

In his recent interview with Arseblog, the Spaniard seemed all too aware of that. He made sure to make it known how deeply he felt towards Arsenal in the hour-long conversation. He talked of how he turned Pep Guardiola down years before signing for him in 2011. He spoke of how he fell in love with the Gunners on his first trip to London and how even though Manchester United were interested, there was only one club in his crosshairs. He mentioned how he waited a week just to hear if Arsene Wenger wanted to re-sign him, and even claimed he moved too early to Barca - a bold statement.

In fact, most of the interview seemed geared towards soothing the bad feeling with those he left behind. The now-Monaco midfielder ended directly speaking to his former faithful, saying, “I know real fans - every single one of you has a little bit of me in [your] heart.”

Andy Mitten column: Harry Kane to Manchester United is a move which makes sense for everyone

It wasn’t this open letter to Arsenal that stole headlines though. Because no matter how much Fabregas tries to repair the damage - no matter how many times he promises an honest and frank account of why he left London - no fan wants to hear that their club held back its captain.

Fabregas said that only two players - Robin van Persie and Samir Nasri - were on his “level”: however deft with a ball the World Cup winner is, that’s a hefty kick in the teeth to the rest of the squad of that era. Fabregas talked of how drained he was emotionally, stopping short of saying he carried the team. He said he regretted badgering Arsene Wenger for the exit. Not leaving - that wasn’t the regret. It was that he had to go that broke his heart.

There’s a difference of perspective. Arsenal supporters never felt their captain desperately had to leave the club. He was adored at the Emirates but chose to force a move to a team he never established himself in. Sure, there might have only been two decent players keeping him in North London, but he was supposed to be the captain.

Such open-hearted honesty is admirable - really, it is. Cesc Fabregas didn’t have to be so candid about what was undoubtedly a key moment in his life. But no Arsenal fan gets any kind of closure hearing from it. It was the same when Robin van Persie explained why he left: it only caused more aggro. Samir Nasri, too. It’ll probably be the same if Alexis Sanchez does a tell-all autobiography.

We get it - it was a hard decision for you but no amount of apology or explanation will ever cushion the blow. Players are just best off reminiscing with “Remember that time” stories - not agonising over the details of the break-up.

The interview was refreshing, insightful and nostalgic. A trip down memory lane to a time when Arsenal were led by a graceful young footballer with the world at his feet. When Cesc Fabregas talks of Arsenal today, you hear the passion in his Catalan inflection - you could almost forget that he left under a cloud.

Ultimately, that’s what history should remember Cesc Fabregas for. What he gave, not what he took. The good times. The goals against Tottenham and everything he left on the pitch. No one wants to hear the truth, the whole truth and nothing but the transfer request.

ARSENAL Why David Rocastle means so much to Arsenal fans

QUIZ Can you name the Champions League last-16's record signings?