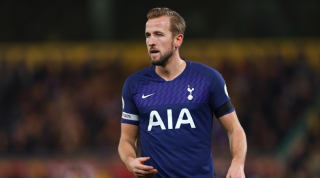 When England’s most recognised centre forward announces that he “couldn’t say yes, couldn’t say no” as to whether he’d spend the rest of his career at Spurs, you know football’s biggest clubs are going to take notice. It was bland and seemingly innocuous, but the message was clear and can you blame Kane? Spurs regressed after reaching the Champions League final and he’d be right to wonder if that was a high point.

Manchester United are England’s biggest and, from Michael Carrick to Dimitar Berbatov, Tottenham have lost some of their greatest players to United, usually after a transfer wrangle involving Daniel Levy. The dynamics have changed, though. Tottenham reached the Madrid final last season, they play in a superior stadium and boast a better training ground than United. But they don’t win trophies.

When Kane finishes his career, is he going to get the grandkids around and point to an empty shelf by the TV and say: “that’s what I won?”

Players like to win trophies, to talk about trophies.

Kane is sending a message to Spurs, but their wage bill doesn’t compete with those at United, City, Chelsea, Arsenal and Liverpool. It’s to Spurs’ credit that they’ve done so well on that budget – though Kane is one of the best paid players in the world - but they still win nothing.

So what about Kane to United? He’s a world class striker who’d improve the team. United have Marcus Rashford, Anthony Martial and Mason Greenwood up front. When Rashford became injured they were desperate for a replacement striker and brought Odion Ighalo on loan until the end of the season. The Nigerian has done well and there are coaches at the club who think that if he had pace and five fewer years he’d be a £70 million striker, but his club want him back in Shanghai and he’s 31 in June.

Kane is very fast, he’s strong. He’s a world class striker, a true number nine. Mason Greenwood is the only other true number nine at the club and he’s a teenager who has started just 17 games. He’s got plenty of time to improve.

Kane doesn’t have time. He needs to all but be guaranteed success, but where? This United can’t guarantee trophies, though they’re in a better position than Spurs. United don’t have a new stadium to pay for either and Spurs will miss Champions League cash more than United would.

So where could he go? Chelsea and Spurs mix like oil and water and are not inclined to do business. Liverpool’s forward line is boxed off. Man City tend to go for younger attacking players, many of whom have played in Europe. United have been buying young, too, so much so that they went into the season with a squad which was too young. It took until the 13th game for United to win away.

Spurs are not going to sell their best player to neighbours Arsenal while United would likely have to break their own transfer record to sign him.

But where would he play? Anthony Martial has been played in a central role, it’s where those who played with him thought he’s end up, but he was the club’s top scorer when he played on the left. Rashford could play alongside another striker, swapping with Kane, going right, making goals and scoring goals. Kane can work the channels, Rashford can go central. It was Rashford’s pace, age and versatality which so appealed to Barcelona a year ago. The Catalans are in a poor financial position and paying the price for profligacy in the transfer market. They need to replace Luis Suarez, but would struggle to go for Kane. United are better off, though no club can continue paying full player salaries when there’s no football. They’d last months.

Kane, at 26, is in his prime. It’s said he’s injury prone. Really? He’s been out in 2020 but he’s played between 38-51 games each season for Spurs in each of the last five seasons, scoring between 28-41 goals. He misses months here and there, but so does every United striker. Kane’s numbers don't lie and he’d scored 17 from 25 games until the recent postponement of matches.

Solskjaer maintains that he’s two or three players away from having a title winning team at Old Trafford. Unlike Spurs, United are judged by the trophies they win.

Improved form appwars to back-up Solskjaer’s confidence but what of his forward line? He was one of four strikers in the treble winning side when United played a 4-4-2. His team plays attacking football, he’s starting to see his actions vindicated after 15 months on the job. He’s got rid of players he considers to be negative. He’s a hugely positive influence around the training ground, he watches all age groups and he knows a striker when he sees one.

United like Jack Grealish, Jadon Sancho and Jude Bellingham. All would be very welcome and costly. The latter is too young to make United into a title winning side but Kane is the finished article.

There would need to be outgoings, but we know little about how the summer transfers will work in these unprecedented times. Football hasn’t been stopped like this since World War Two, though the harsh winter of 1963 saw no United games played between December 26th and February 23rd. United escaped to more temperate climes: Cork, Ireland.

Bruno Fernandes’ transfer has come out of the summer budget and the United futures of Jesse Lingard and Paul Pogba don't look bright, while Kane’s under contract until 2024. It’s easier to extract diamonds from rocks with your teeth, blindfolded, than to get top players from Spurs, too. Luca Modric and Gareth Bale had to force their moves. Kane, as a local boy, might be reluctant to do that, but if a player wants to go they usually get their way, even if their club want the earth for him. And Spurs know they’ll get more money for a player when he’s 27 than they will when he’s 28 or 29 or 30.

When Robin van Persie walked into the dressing room at Carrington in 2012, the rest of the squad thought ‘Wow, this club is serious about winning the title back’. Kane would have the same effect. He’s no mercenary, nor a player coming to the end of his career like some of United’s post Ferguson signings, but he’d be a brilliant one.