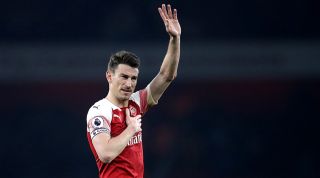 Arsenal's pre-season troubles continued to escalate with the news that Laurent Koscielny, club captain - the main one, not among the team of five or whatever mad thing Unai Emery has in place - has refused to travel on their pre-season tour to the USA.

On the surface, this is surprising. Koscielny is a model pro; a rare beacon of calm in Arsenal's otherwise-alarming backline. He's been there nine years. The fans love him. Of all the defensive problems Arsenal thought they'd have to solve this summer, this feels like it's come out of left-field a bit.

However, look a little deeper and this actually makes perfect sense. Arguably, Arsenal haven't had a stable captain since Patrick Vieira - nearly 15 years ago.

Nobody can ever decide how important a club captain is, but in Arsenal's case its power began to diminish when the armband was handed from Vieira - the side's engine, a creative fulcrum in the middle, the natural heir to Tony Adams - to Thierry Henry. Yes, he was one of Arsenal's best ever players, but probably not the natural choice.

Arsenal still had Gilberto Silva in their midfield, and Jens Lehmann was still their keeper. Giving the captaincy to Henry felt like a bit of a carrot to help ward away interest from abroad; a tacit admission that without him, Arsenal were done.

To be fair, Henry smashed it that first season. He was top scorer and broke Arsenal's all-time goalscoring record. But the next season he was crocked and then ended up going to Barcelona, despite saying he never would. Which leads us to...

Gallas was a good defender – let's get that straight. But as his big sit-down protest on the pitch at Birmingham City illustrated, he probably wasn't best placed to lead an inexperienced team through a transitional period in the club's history.

Also, Gilberto is still at the club at this point. The previous season he'd actually worn the armband a lot while Henry was injured, but for some reason Wenger opted for Gallas. Gilberto left the following season and Gallas slagged off Arsenal's youth team in the press. He was promptly dropped, fined, and replaced by...

This one did sort of make sense. This was an Arsenal squad where only three members were over 30 - Gallas, Manuel Almunia, Mikael Silvestre (lol). It was a collection of very young, very exciting players, so who better to lead them out than the most promising one? Fabregas was amazing. This was it. Yes.

Then he did his ligaments in December and was out for the rest of the season. Fabregas was Arsenal's top scorer the following season, but Barcelona had made their intentions clear and despite signing a new contract at the start of the 2010/11 season, he left the following summer. Next up?

Scored so many goals that Arsenal decided to sell him to Manchester United so that they could win the title. Very thoughtful, really.

Vermaelen was really good almost until he got given the armband. His decline in form - wayward runs, unreliability - coincided neatly with this new responsibility thrust upon him. He lost his place as Wenger opted for Koscielny and Mertesacker, suffered a spate of of injuries anyway, and then for some reason Barcelona also signed him.

Very much the company man. Short-back-and-sides captain. Ham and cheese sandwich, no-mayo captain. Not bad, but would we say he was good? Really? A captain who exemplified Arsenal's fall from grace, if we're being completely honest. Again, the Spaniard struggled with injury. Again, he was past his peak. Arsenal probably should have won the league in his last season but y'know... Leicester.

Arteta's departure brings us to the Wenger Out years. Per Mertesacker took the captain's armband, but once again injury curtailed the amount of appearances he could make.

Admittedly, his only start of the 2016/17 season was in the FA Cup Final, where he played incredibly and Arsenal won. This alone probably makes Mertesacker the best Arsenal captain since Vieira. The following season - his last before retirement - he only made a handful of starts again, and then it was over. Merci, Arsene.

So that brings us up to date, with Koscielny. There are those who think that a captain's importance is overstated; that in a world where football is broken down into statistics and data, something as old fashioned as a grizzled old pro shouting "YOU'VE GOT TO WANT IT" might not be the silver bullet it was once thought to be.

Emery, you'd assume, agrees with this. It's why he deploys the slightly strange system of having five players taking the armband on shift - a move not entirely without precedent, if you're a West Brom fan and remember Bryan Robson doing a similar thing, where the players would take a vote on who the captain was at the start of each game.

However, if you think the curse is over, far from it. As well as Koscielny, Arsenal's other four captains last season were Petr Cech, Aaron Ramsey, Mesut Ozil and Granit Xhaka. One lost his place (then retired), one left on a free, one we're desperate to get rid of, and one absolutely loves shooting from 30 yards.

Arsenal fans will be hoping Shkodran Mustafi gets the armband next - the surest guarantee he won't be at the club for much longer.