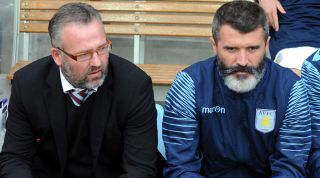 Aston Villa’s playing staff remain adamant that there never was anything out of the ordinary attached to Roy Keane’s face, despite overwhelming evidence to the contrary.

Since Keane was brought in as Paul Lambert’s second in command in the summer, results have been impressive and relatively few players have reported mysterious broken limbs.

The players have been unanimous in their loud praise of Keane and seem to miss him when he’s not around, asking repeatedly in cowed tones whether anyone knows where he is and what mood he’s in.

But when quizzed about Keane’s decision to cultivate a long, bushy, unkempt hobo beard, his charges were unusually reluctant to engage.

“Beard? I don’t know what you’re talking about,” Ashley Westwood told FourFourTwo while staring anxiously into the middle distance. “Nope, there was no beard. Not that there would be a problem if he did have one. But he didn’t. Unless he says he did.”

However, FFT was able to persuade an insider to talk under the cover of anonymity and he revealed the full extent of Keane’s beard.

“It was even worse that you saw on TV, like roadkill on his face,” our source said. “We were all too scared to mention it.

“But now it’s even worse. He keeps stroking [his clean-shaven chin] and asking us whether he should grow a beard one day. There really is no right answer.

“The gaffer [Lambert] just lets it go. I think he’s still hurting because it took him a year to grow [a beard] and Keano smashed one out in a couple of weeks.

“The worst thing is that it clearly wasn’t Keane’s hair anyway. It was completely the wrong colour and texture, it didn’t even look believable. He seemed to stick a new bit on each day.”