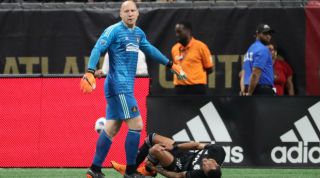 Just 34 minutes into the clash between MLS conference leaders on Wednesday night, the former Aston Villa and Middlesbrough goalkeeper was sent off.

The 33-year-old USA international rushed off his line in a futile attempt to prevent Khiry Shelton from getting a clear shot away, but merely sunk his studs into the 24-year-old instead of clearing the ball.

Guzan's face said it all.

Atlanta slipped to a 2-0 defeat after second-half goals from Daniel Salloi (67') and Gerso Fernandes (87').

"Unfortunately for Guz, he has to make that play," Sporting KC manager Peter Vermes told MLSsoccer.com when asked about the sending-off.

"If he doesn’t take out Khiry [Shelton], Khiry goes in and taps it into an open net."

When Guzan was asked if it was the correct decision to send him off, the net-minder replied: "Um, yeah... it was a red card."