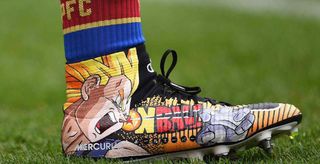 The design on Sako’s Nike Mercurial Superfly V boots was created by Pierre Navarro, aka Orravan Designs, as part of his ‘MANGA Collection’.

The Palace man's jazzy creations were debuted on Saturday, when Palace were narrowly beaten 1-0 by Southampton.

The Mali international was luckier on Tuesday night when he scored the only goal against Huddersfield – in different boots, alas – to send the Eagles soaring into the next round of the Carabao Cup.

Navarro has created boots for the likes of Lukas Podolski and Pierre-Emerick Aubameyang in the past, and with any luck we’ll see more of his creations on pitches soon.

The ‘Dragon Ball Z’ pair is one of four set to be worn by Sako during the Premier League this season.