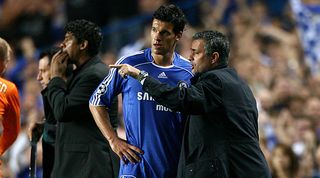 It wasn't always plain sailing for the German during his days working for Mourinho at Chelsea – despite his status, he sometimes faced criticism from his boss. But the former midfielder has a simple message: don't take it too personally.

"If you work with Jose Mourinho, you have character and you're strong – you should enjoy it," Ballack tells FourFourTwo. "I enjoyed it, because it was always challenging."

Ballack arrived at Chelsea from Bayern Munich in the summer of 2006, playing under Mourinho for just over a year before the manager's departure in September 2007. The midfielder played 46 times for the Portuguese boss, but was once publicly warned that he was 'not untouchable' as a first-team regular.

Mourinho has often been prepared to criticise star players in the media – something that continued during Manchester United's difficult start to the 2018/19 campaign.

"I don't want to say that he will test you, but if he criticises players, he's doing that for a reason," Ballack explains. "It's not unusual for a coach to criticise players in the media – it doesn't matter who it is. For high-paid players, it's your job and you have to deal with criticism, even from a coach.

"Sometimes players are so sensitive because they're mostly superstars, but they're part of a team. They have to understand how a team works and how to be successful in a team. Sometimes I had to personally step back a bit and if I got criticised, it was sometimes not against me. It's a normal process. Don't pay too much attention to that and [don’t] take it personally.

"Of course, big players are involved so sometimes it's a difficult situation, if it's Pogba and Mourinho. But from my experience of how he handles relationships with big players, with the leaders in the team, Mourinho is experienced and he knows to handle these kinds of players; how to support them. He knows that if he wants to be successful, he needs the big players behind him.

"He's handled them in the past because he had success – he won the Champions League with two different teams, he won the league in different countries. There aren't many coaches who have that experience."

Ballack believes there is one key ingredient required if Manchester United are to get back on track under Mourinho: the manager needs to feel that everyone at the club trusts him.

"I always felt in the relationship we had at Chelsea, if he feels the support from the fans, he pays that back and he pays it back with everything he has," the 42-year-old tells FFT. "It sometimes isn't easy under him, but he knows how to win matches and he knows how to handle difficult situations – even if some people love him and some people don't.

"What's important for him is that the club and the people he works with support him, and there's trust. That's really important for him to be successful. Sometimes there's a difficult situation and sometimes he's not easy but this is part of Jose Mourinho; that's what you get if you appoint him. There are always strong personalities at big clubs, especially Manchester United, and they should handle that.

"United are a big club with big ambitions and big history, and since Sir Alex Ferguson stepped back it's not been easy for the coaches after him to maintain the mentality of his generation. Mourinho is a coach who normally delivers that – he's a winner and has a winning mentality, with all of his characteristics as a person.

"You have to deal with him, and as a club and as players, you have to find a good relationship with him. If you appoint Mourinho, you know what you get. You have to be 100 per cent committed to his way and you have to accept that. Even if sometimes it's difficult, you know it can be really successful."

Manchester United are in Champions League action at Juventus on Wednesday, while Ballack's former club Chelsea travel to BATE Borisov in the Europa League on Thursday.

EXCLUSIVE Zlatan: Premier League is overrated – but if you can’t handle the pace you won’t succeed

Ballack enjoyed his time as a player at Stamford Bridge and was linked with a return to Chelsea recently, as a potential contender for the role of sporting director following Michael Emenalo's exit.

The German remains open to working in England again one day, but says it's unlikely to happen in the near future. "I hope there might be something possible, but I don't know where and when," he says. "At the moment I think things at Chelsea are fine, and I don't know how things will be in the future."