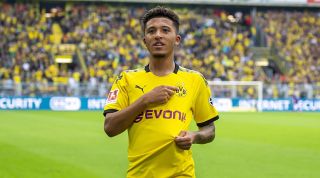 Can Dortmund break the Bayern stranglehold?

Well, obviously. Borussia Dortmund were the last side other than Bayern Munich to win the Bundesliga, when Jurgen Klopp’s swashbuckling side boasted current Bayern striker Robert Lewandowski, plus the artistry of Marco Reus, Mario Gotze and Shinji Kagawa – and finished eight points above the Bavarians in 2011-12.

Manager Lucien Favre has dealt with the loss of Christian Pulisic to Chelsea by bringing in wingers Thorgan Hazard and Julian Brandt, while Mats Hummels has returned for a second spell and Paco Alcacer’s loan from Barcelona has been made permanent. Hopes are high for Jadon Sancho to produce again after his stunning breakout season in 2018/19 – and a goal in the opening weekend's 5-1 rout of Augsburg suggested more of the same.

“I think the management from Dortmund did a great job this summer,” former Dortmund keeper Roman Weidenfeller – part of the 2011/12 title-winning team, told FFT at a recent Bundesliga media event. “They bought Brandt, [Nico] Schulz, Hazard, and I think this season we have a chance to go for the championship.”

Are Bayern Munich short in attack?

Niko Kovac’s side face a tough challenge to win an eighth straight title in 2019/20. They responded to conceding 32 league goals - the most in any of their seven previous title-winning years before that - by shelling out over £100m on French World Cup-winning defenders Lucas Hernandez and Benjamin Pavard.

A cruciate ligament injury hampered their chances of signing Manchester City winger Leroy Sané after they were linked with the 23-year-old for much of the summer, but winger Ivan Perisic has been loaned from Inter Milan to help replace departed duo Arjen Robben and Franck Ribery. The headline arrival is Philippe Coutinho joining on loan from Barcelona for the campaign.

Serge Gnabry and Kingsley Coman will be used heavily, while young wingers Alphonso Davies and Sarpreet Singh featured frequently in pre-season and made Bayern's bench for their 2-2 opening-night draw with Hertha Berlin after impressing Kovac in recent friendlies. “They don’t do it only for fun. They see the potential in this player,” legendary Bayern midfielder Lothar Matthaus told FFT of the young duo's recent signings.

Can Jadon do it again?

British interest in the Bundesliga has piqued after a number of youngsters, including Ademola Lookman, Reiss Nelson, Reece Oxford, Ethan Ampadu and Jadon Sancho, joined the league in recent seasons. Lookman has returned to RB Leipzig permanently from Everton after a productive loan spell in 2017/18, while Chelsea boss Frank Lampard hopes defender Ampadu will benefit from a season alongside Lookman at the Red Bull Arena.

England winger Sancho, who has made such an impression at Signal Iduna Park since joining from Manchester City for £7m in summer 2017, will be looking to deliver again after scoring 12 times and assisting 14 more in a breakout Bundesliga campaign.

The 19-year-old picked up where he left off last season with a goal and assist in Dortmund's recent Super Cup win over Bayern, and then netted on the opening weekend against Augsburg to open his account for the campaign. "I don’t understand Guardiola, how he can lose this player," Matthaus told FFT before the Super Cup. "Especially Guardiola, who knows to care about young players."

Union Berlin are competing in the Bundesliga for the first time in 2019/20, after beating Stuttgart in the relegation/promotion play-off last season.

Expect plenty of noise and pyro at the brilliant Stadion An Der Alten Forsterei (literally 'Stadium by the old forest'), where three sides of the ground are terraced. Rare meetings with Hertha Berlin, scheduled in November and March, are sure to be eventful for Die Eisernen.

Union will be joined by FC Köln and Paderborn, who have made a miraculous return to the top flight after three successive relegations. They would have plummeted from Bundesliga to fourth tier, but for a reprieve in the 3.Liga after 1860 Munich's financial problems kept them afloat.

Back-to-back promotions later, the west German side are back in the big time after teetering on the edge of footballing oblivion just over two years ago.

Which bosses will shine brightest?

Seven sides go into the season with new managers at the helm; highly-rated German bosses Julian Nagelsmann and Marco Rose are in at RB Leipzig and Gladbach respectively, while former Huddersfield boss David Wagner is back in Germany with Schalke. Nagelsmann's appointment at Leipzig was announced last year, and he saw out the 2018/19 season with Hoffenheim, where he became the Bundesliga's youngest ever manager after being appointed when he was just 28.

Commentator Derek Rae, who covers German football for international television, says the success of German coaches such as Daniel Farke and Jurgen Klopp is a "big plus" for both the Bundesliga and the Premier League.

"I think the structure of English clubs is more and more mirroring what’s being done here in Germany; sporting level, recruitment level and then with the coaches themselves," he says. "Obviously, Klopp is the best role model you could find. I think Ralph Hassenhuttl, in a short space of time, has impressed people with what he’s done. He’s of the German school.”