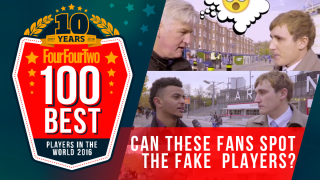 As we count down the Best 100 Players in the World 2016 this week, we hit the streets to find out your opinions, too. We ventured over to Stamford Bridge and the Emirates Stadium to see what Chelsea and Arsenal fans (and the odd Tottenham fan) made of our selection.

However, to liven things up a little, we made up the list. And the order. And some players.

Would the fans recognise the imaginary players? Is Mark Noble really No.99 in our list? Who is the European left-back Strap Banging?! Supporters of Tottenham, West Ham and Leicester might want to watch on, too. Click play on the video below to see what happened.