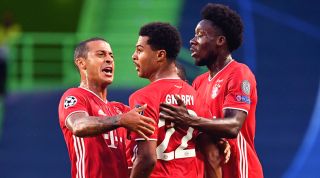 Three minutes on the clock, 20 clubs to guess.

NOW TRY Quiz! Can you name the former clubs of the most valuable 20 players on Earth?

In perhaps the least surprising twist of the Champions League this season, Bayern Munich have got to the final.

Bayern are used to being one of the last two teams standing in the competition. They've won the tournament five times and been runner-up another five. Their first three wins came in a row in the mid-1970s.

But that's not all that Bayern have competed in. They have a Cup Winners' Cup in their cabinet, a UEFA Cup and have played Intercontinental Cups, Super Cups and Club World Cups.

Today, we'd like to know how many of their final opponents you can remember over the years. Just the three minutes, for this one.

RANKED! The biggest Champions League knockout victories of all time