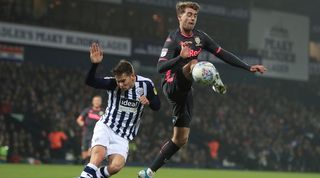 The top of the Premier League may have been a foregone conclusion since Christmas, but the battle to be promoted out of the Championship still has plenty left to offer.

This weekend in particular could crush some promotion hopes, while putting others within touching distance of the top flight's holy grail. With four games left to play, every single team in the top 10 faces another top 10 side within the space of 48 hours.

Two of the games, Friday night's Fulham (4th) vs Cardiff (6th) and Saturday lunchtime's Derby (9th) vs Brentford (3rd) will be shown on Sky Sports, with all the other games available via online iFollow streams. For details on how to watch every game, check out FFT's 'how to watch' listings page.

HOW TO WATCH Live stream news: How to watch BT Sport, Sky Sports and BBC games on a Now TV Stick

The bizarre fixture coincidence could shake up the top half of the league to such an extent that means both play-off and automatic promotion spots are still up for grabs come the final day – or settle a number of questions early.

Both Brentford and Fulham could secure their places in the play-offs this weekend if results go the right way. Leeds (1st, playing Swansea, 7th) could find themselves a point away from the Premier League, or they could relinquish the top spot to West Brom (2nd, playing Blackburn, 10th) – unless the Baggies find themselves about to slip back into the play-off places themselves.

Any one of four teams could be in 6th place come Sunday evening, and Blackburn and Millwall could even find themselves thrown back into the play-off mix – resulting in a six-way, three-point battle for the final spot with three games to play.

See below for the big promotion fixtures this weekend.

Who the Championship top 10 play this weekend