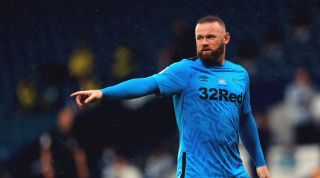 As the end of the season approaches, Derby County are sitting in 9th in the Championship. Having been buoyed by the signing of Wayne Rooney, the Rams are looking at keeping up this momentum and snatching a place in the play-offs - it won't be easy, but anything is possible with the former England star in tow.

It's a similar story at Brentford. The momentum has kept on rolling at Griffin Park as the Bees have taken advantage of recent slip-ups from Fulham. They now find themselves five points behind West Bromwich Albion - could they catch them up in the final four games of the campaign?

Kick-off is at 12.30pm BST and the game is being shown on Sky Sports in the UK. If you don't have a Sky Sports subscription you can pick up a Now TV day pass right now for just £9.99.

If you’re on holiday or just simply out of the country, your domestic on-demand services won’t work – the broadcaster knows exactly where you are from your IP address. Your access to the game will be automatically blocked, which is annoying if you’ve paid a subscription fee and don't want to use an illegal, buffering stream that makes you miss another moment. And that's where we recommend ExpressVPN (more on which below).