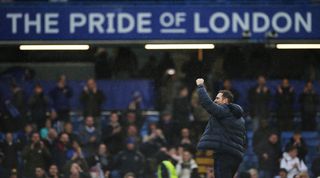 Chelsea’s visit to Manchester City on Saturday evening will be billed as an early examination of Frank Lampard’s management. The season is nearly four months old, but still the suspicion remains that Lampard’s progress is a feelgood story, a tale of intangibles rather than one with basis in technical merit.

It’s not fair, but it’s understandable. There’s something so seductive about Chelsea’s recent arc and anyone not charmed by it is being miserly.

There’s plenty of reason, though, to believe that Lampard’s players are travelling north to Manchester at the right time. City aren’t exactly there for the taking, they remain an exceptional side, but they aren’t invulnerable in the way they were twelve months ago. The midfield still isn’t quite right; the defence has obvious weaknesses.

So the temptation is to see this as a game of opportunity and view it through the literal binary of the league table. Given where this Chelsea are on their development curve, however, that’s premature.

Lampard himself is still learning and very obviously outmatched in his private contest with Pep Guardiola. Player for player, Chelsea are also inferior. City are rightly and inarguably favourites and should really be winning the game.

But if ever such a thing was true, Saturday will be about more than the result. In fact, viewed from a particularly – and admittedly slanted – perspective, this fixture actually provides a valuable opportunity.

At the genesis of any memorable football team, there’s usually a moment of adversity. It’s true in all sport, actually – there is always the achievement which justifies the telling of their tale and then, far back, a reference point which led them towards their objective.

It would be dramatic to frame this single league game in that way, but it will involve some of those themes. Most of all the sense that it might leave an impression on a young and pliable core of developing players, all of whom are yet to experience the colder realities of playing for a club at the top of the table.

Call this Chelsea’s Phase Two, then.

It’s important to note that this has been an easy evolution so far. That shouldn’t change the context in which Chelsea’s results have been achieved, but it’s still fair to recognise that Lampard inherited his job from a highly unpopular predecessor and that this crop of debutants (Mount, Abraham, Tomori and – to a lesser extent – Hudson-Odoi) have had about as soft an entry into Premier League life as they could have hoped for.

And that’s not a criticism. They’ve needed that gentle beginning. Lampard has been smart enough in his timing, too, recognising that last season’s detested style created the leeway for experimentation. The club’s transfer ban has also provided protection from the pitfalls of such change and, again, he’s been wise enough to take advantage of that.

He’s been bold in his selections and bullish with the media when he’s needed to be. The players who’ve benefitted have also taken their opportunities wonderfully well.

What’s missing, though, are the usual conditions in which Chelsea operate, in which even cherished players are held to an extremely high standard. Normally, for instance, Fikayo Tomori’s performance at Southampton might have drawn more dissent and, if he were a player of a different origin, Callum Hudson-Odoi's mild slump might be attracting more criticism.

That’s life at the top of the table and, at some point, these Chelsea players will have to cope with it.

And that’s why Saturday night feels significant – not as a one-off game, but as a conditioning experience which, even if it’s negative, is still likely to be revealing and - possibly - productive too.

It should be for Tammy Abraham, for instance, who will most likely be limited to one or two chances at most. How will he cope in the event that his failure to take those opportunities changes the game’s outcome? And, as an inevitable consequence, how will he handle the analysis that insists that, actually, in spite of his goal tally this season, he isn't quite good enough?

Read the same for Mount, if he fails to exert enough influence. What kind of effect will that have on his self-belief? More importantly, if he does find himself out of his depth in that midfield, what kind of reaction will that provoke in him and how will that manifest the next time he plays in a game of this magnitude.

Or Tomori, if Sergio Aguero and Raheem Sterling have their own way. How might that change him?

But none of those reactions need to be negative. Invert the trite rationale about the damage that young players can suffer under the bright lights, and consider how the experience might actually improve them. Shape them, educate them, create a reference point around which they can adapt. It's a chance for them to learn just how good, efficient and precise they need to be against an elite opponent.

Ultimately, over the long term, what matters most about these games is what they breed. The comments, the criticism. It’s not just pressure, it’s an exhaustive and often toxic scrutiny specific to this type of fixture. But any player who hopes to succeed at Chelsea’s level of the game has to learn to cope with those forces. The ones who thrive at the game's summit somehow find a way to be energised by that rare air.

So that acclimatisation begins now. The prospect of such a young side being exposed to Manchester City’s power is slightly wince-inducing, but these are the matches which help build the teams and players that people really remember, whether they feel significant at the time or not.

QUIZ Can you name every English scorer in the 2019/20 Premier League?