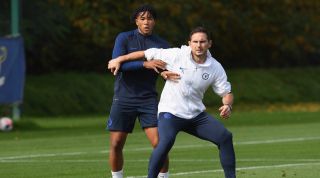 Chelsea starlet Reece James has revealed the hero’s shirt he still hangs above his bed to this day - his manager, Frank Lampard’s.

James has been at Chelsea since 2005, joining the club’s youth academy as a six-year-old. A trip into the Chelsea dressing room as an eight-year-old resulted in him getting his hands on a still cherished piece of memorabilia.

“I got taken into the Chelsea dressing room, they gave me a shirt and all the players signed it, including John Terry and a lot of others,” James told the April issue of FourFourTwo, available in shops from Thursday March 5. “It’s still at my parents’ house today, hung over my bed. Frank Lampard’s name is on it – I haven’t told him so I’m not sure he knows, but he’s definitely on there!”

The right-back is just one of a number of academy products to break into the Chelsea first-team under Lampard’s stewardship this campaign, along with the likes of Tammy Abraham and Mason Mount. For James, playing for his idol is added motivation.

“I admired Lampard and all the main leaders of the team when I was a kid. Every other game, he would score a brilliant goal. When I heard he was the manager, it was great – he’s a Chelsea legend.”

James also revealed how Lampard had tried to sign him for Derby County in January 2018, when he was still manager at the Championship club. James decided to stay on loan at Wigan Athletic, however.

“He wanted to sign me for Derby last January, but it didn’t go through,” he revealed. “I was happy playing at Wigan. It was good to know he rated me, although that was at Championship level, and when you get a big job at a Premier League team, sometimes minds can change. But we spoke when he arrived and he said he wanted to give me a chance. I was injured, and he told me to come back in the best shape possible. I’m thankful that I’ve got to work with him.”

Read the full interview with Reece James in the April 2020 issue of FourFourTwo magazine, out in shops and available digitally from Thursday March 5. Our new magazine reveals the stars of the decade – the 50 wonderkids who'll rule the next 10 years, with an exclusive interview with Erling Haaland, Marcus Rashford, Vinicius Jr, Gabriel Martinelli, Ruben Neves and Lauren James – as well as profiles of Trent Alexander-Arnold and Kylian Mbappe. We also chat to Steve Clarke and Mick McCarthy and Scotland and Ireland in the Euro 2020 playoffs, revisit the last time Liverpool won the league, and chat to Nobby Solano, Yakubu and Wes Brown about their careers.